He would have been 80 this year.

Sing along to a particularly beautiful poem he wrote.

So this is Christmas and what have you done
Another year over, a new one just begun

And so this is Christmas, I hope you have fun
The near and the dear ones, the old and the young

And so this is Christmas for weak and for strong
The rich and the poor ones, the road is so long

And so this is Christmas and what have we done
Another year over, a new one just begun

And so happy Christmas we hope you have fun
The near and the dear ones, the old and the young

And so this is Christmas and what have we done
Another year over, a new one just begun

Posted by Bryan Pendleton at 3:46 PM No comments:

Somewhere along the way I was gifted William Alexander's 52 Loaves.

Alexander sets out to try to learn enough about baking bread to enable him to recreate, in his home kitchen, the marvelous loaf of bread he had at a fancy restaurant. He decides that he will devote a year to this goal, baking the same recipe over and over, at least once a week (hence the title).

Of course, just baking the same recipe over and over doesn't really get you anywhere, much though your ten thousand hours of practice might please Malcom Gladwell, so Alexander does much more than that. He reads books and watches videos about baking bread. He interviews bakers about their craft. He learns about his ingredients, how there are many kinds of flour, many kinds of yeast, variations of temperature and time, ratios of this to that, etc.

And he learns about the history of bread, and about the culture of bread. The cultural aspects are among the most interesting parts, as he ends up traveling to France, to Morocco, and elsewhere, to learn about how different societies include bread into their lives.

In Morocco, for example, Alexander learns that individual houses don't have their own ovens, and instead people bring their bread dough to a magnificant communally-shared wood-fired brick oven that can bake dozens of loaves at a time. He promptly decides that he needs a wood-fired brick oven of his own, and attempts to build one in his back yard, with predictably disastrous results.

It's that sort of a book.

And you'll have a fair amount of fun doing so, as Alexander is a light and entertaining writer.

Moreover, since the book itself is constructed as 52 tiny chapters (an artifice, as these have little to do with the actual weeks of his bread-baking year), the book is perfect for placing in that special room in your house. You know, the one that you find yourself in with some regularity, where reading a 3.5 page chapter is just right for your time allotment.

Posted by Bryan Pendleton at 10:30 AM No comments:

Barry Ritholz is a smart fellow, and a good writer. I mostly read his writings for his observations on Finance and Markets, but he often has a broader outlook that I find helpful.

For example, here: The Halfway Point.

Think about what how unique this situation is, how rare an opportunity it presents for you — and then go take full advantage of it. What do you want this period to have meant to you? Do not lead a life full of regrets and unrequited interests…

Posted by Bryan Pendleton at 9:41 AM No comments:

In these stressful times, I just wanted to share some nice things:

Posted by Bryan Pendleton at 7:33 PM No comments:

I have no idea how I missed this picture when it first came out years ago. 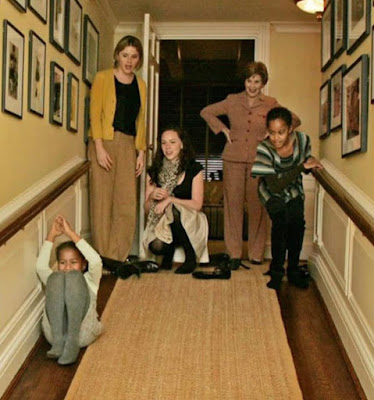 Just in case, left-to-right, this is a picture of: Sasha, Jenna, Barbara, Laura, and Malia.

It made me smile (actually it made me laugh for joy), so I wanted to share it.

Posted by Bryan Pendleton at 5:26 PM No comments:

Is Hurricane Eta an unusual hurricane?

In what has surely been an unusual year for hurricanes, Hurricane Eta seems it like has been particularly unusual.

Check out how it behaved in the first 10 days: 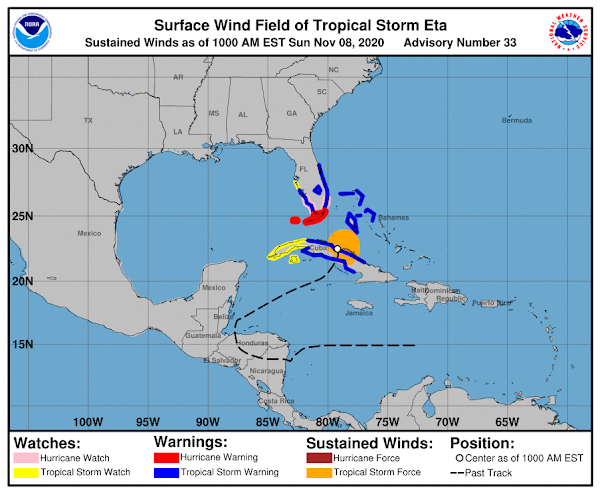 It started near the Venezuala coast, headed due west, made a ninety degree turn, traveled over Nicaragua and Honduras, then made another 45 degree turn and went back over the open ocean and traveled east northeast and last night crossed over the center of Cuba, reportedly moving 60 miles per hour at that point.

But now, it is forecast to make a 145 degree turn and head due west again, this time back into the center of the Gulf of Mexico. 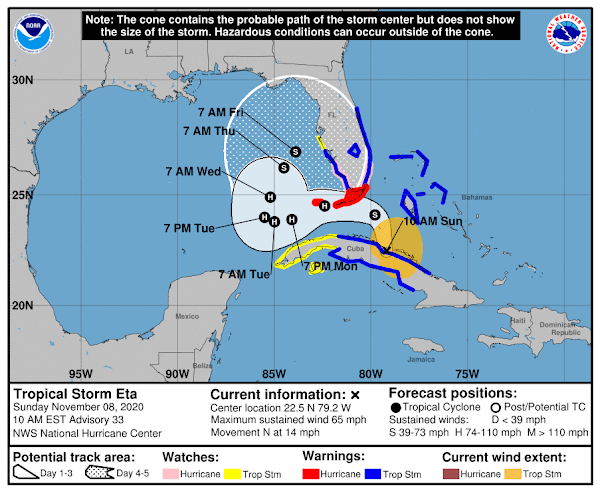 Then, after spending 3 days moving at barely 10 miles per hour over the Gulf of Mexico, and returning to hurricane strength, it is forecast to make yet another 90 degree turn and head due north, towards the Florida pan handle.

Since the NHC only attempts a maximum forecast of 5 days, there still may be much more chaos to come.

What a strange and unusual hurricane!

Posted by Bryan Pendleton at 9:11 AM No comments:

But every so often they go back and review something from the past. On its 50th anniversary, they cover my favorite popular music album of all time.

Pitchfork virtually never give an album a perfect 10, it is quite rare. But they picked the right one this time! Grateful Dead: American Beauty / The Angel’s Share Album Review.

Released in November 1970 and reissued for its 50th anniversary this month, American Beauty is a pure and potent representation of Dead-ness as a philosophical outlook. Earlier in the year, with Workingman’s Dead, the band made an abrupt about-face from the murk and discord of previous albums toward the bluegrass and folk that had captivated Garcia in his early days as a musician, with some Buck Owens and Merle Haggard thrown in for good measure. American Beauty, which came just five months later, uses a similarly earthy palette, but its concerns are quite different. The songs of Workingman’s Dead, filled with archetypal characters of the American West, involve a fair amount of rambling and gambling. American Beauty is more like a guided meditation, or a solitary swim in a cool, clear lake.

I found myself nodding along in agreement with the entire review, except for the one part where I had to stop and look up the meaning of "eremitic".

Posted by Bryan Pendleton at 8:45 AM No comments: