Fallout 4 is pretty much centered in the sweet spot of Computer Games For Bryan:

So it's no surprise that it's consumed most of my game-playing time over the last six months, closing in on 75 hours of game play (I don't get all that much time to play computer games, nowadays).

It's pretty much unavoidable, for me at least, to compare Fallout 4 against The Witcher 3, and unfortunately Fallout 4 doesn't fare so well:

So why do I keep coming back to Fallout 4? Why haven't I moved on?

Well, I think this fun article on the Comicsverse site goes a long way to explaining what it is about Fallout 4 that gives it true staying power: 10 Ways FALLOUT 4 Will Make You Question Your Existence

Two years, and it’s still one of the most played games out there. That’s simply because FALLOUT 4 has so much to offer, way more than you’d expect from a video game. I firmly believe that this game can make people question themselves. I say this because two years later I still think about the impact it’s had on me.

Countless parts of FALLOUT 4 stand out and make it one of the greatest games released in the past few years. Several parts of this game have made me think differently about what it means to be alive. Here are ten ways FALLOUT 4 will make you question your existence

Karen Engelmann's The Stockholm Octavo is a curious nugget.

Well, yes, yes, yes to all of the above. It's rather a little bit of everything.

But, somewhat like going to the casino buffet and wishing they'd spent a little bit more time making the chicken good instead of providing chicken, beef, lamb, pork, and turkey, The Stockholm Octavo tries to accomplish a lot, perhaps rather more than one ought to attempt in a single book.

Still, it's extremely enjoyable, and you certainly will never have thought so much about the role of ladies's fans in elegant society as you will when reading it.

You might consider pairing it with A Place of Greater Safety for your what-was-the-experience-like-for-people-in-Europe-during-the-French-Revolution double-header.

If you do happen to read The Stockholm Octavo, drop me a line; tell me what you think!

Posted by Bryan Pendleton at 10:41 AM No comments:

Another edition of HPTS

The International Workshop on High Performance Transaction Systems (HPTS) is a bit of an unusual conference:

Every two years, HPTS brings together a lively and opinionated group of technologists to discuss and debate the pressing topics that affect today's systems and their design and implementation, especially where performance and scalability is concerned. The workshop includes position paper presentations, panels, moderated discussions, and significant time for casual interaction. The presentations are not recorded, and the only publications are slide decks by presenters who choose to post them.

HPTS was created back in 1985 by Jim Gray, as conference organizer Pat Helland describes in his reflections on Gray:

In 1985, Jim and a number of other senior leaders in the field of transaction processing started the HPTS (High Performance Transaction Systems) Workshop [HPTS]. This is a biennial gathering of folks interested in transaction systems (and things related to scalable systems). It includes people from competing companies in industry and also from academia. Over the last 22 years, it has evolved to include many different topics as high-end computing morphed from the mainframe to the Internet.

The amazing thing about HPTS is that it is a collegial and supportive community in spite of the fact that many of us are competitors. We gather as old friends and catch up on life’s changes in family, friends, and work. We share almost all of the latest technology trends while holding back only the truly critical trade secrets. When someone needs a new job, there is a supportive network with common passions. This culture was based on Jim’s natural supportive, caring, and HUMAN approach to technology and persists today.

Last month saw the 17th convening of the HPTS Workshop, and you can read all about it on the HPTS site.

This year, in addition, SUNY Buffalo professor Murat Demirbas posted his notes about the conference, although as he noted, doing so is a tad controversial:

Although some people prefer to keep what happens at HPTS to stay at HPTS, I find it hard to not talk about HPTS. I learn a lot at HPTS and I want to share at least some of those. And this year I don't think there was any confidential technology discussed at all. So I don't think Pat Helland will find this post and shout at me.

I'm certain Pat found the post, but I don't think he's going to shout about it.

(You can tell a true Computer Scientist because they start their notes from Day 0.)

I didn't attend HPTS, although a number of my colleagues did (no surprise: Pat Helland leads my team at work). Among my team, the panels of most interest were the "Verification of Systems" and "Antifragile Exercises" panels, which were both super-practical panels, focused on how to build reliable distributed systems out of unreliable components. It's super-interesting stuff, comprising both practical tools for analyzing system behavior and finding implementation errors (e.g., Jepsen) as well as practical tools for "hardening" your production systems (and personnel!) in most surprising ways (e.g., Chaos Monkey).

It sounds like it was another very successful workshop, and it was fun to get a closer view into it this year.

Posted by Bryan Pendleton at 8:54 AM No comments:

Been Too Dang Busy To Read. Well, busy is good, I think?

Posted by Bryan Pendleton at 9:43 AM No comments:

They're taking down the construction cranes at 181 Fremont, one block from my office; soon it will be the new Facebook offices in the city.

Across the bay, and closer to home, Oakland isn't missing out on the construction boom.

There are buildings being built: Emerging Oakland high-rise to cover beloved mural

The only problem with this location is that it’s also right next to Jimmy’s Deli and the Academy of Chinese Culture on 17th Street, the site of a massive mural by anonymous New England street artist Believe In People (BiP).

BiP painted the piece, titled Vintage, depicting an elderly woman rocking out to thrash metal, on the side of the building overlooking the parking lot in 2016.

And there are other buildings proposed to be built: Planning commission approves Oakland's tallest residential building

Oakland's planning commission voted Wednesday night to recommend the approval of the city's tallest housing development ever, a soaring 40-floor tower by developer Carmel Partners, that would replace the Merchant's Parking Garage at 1314 Franklin Street diagonally across form the historic Tribune Tower downtown.

Meanwhile, I unfortunately managed to miss the blockbuster 60 Minutes episode on the Millenium Tower, which sits precariously in between my office and 181 Fremont.

half a world away, in a suburb of Amsterdam, San Francisco's sinking tower came across the radar of Petar Marinkovic, an engineer who works with the European Space Agency to track earthquakes. Using signals from a satellite 500 miles above the earth, Marinkovic measures ground movements around fault lines. In 2016, he happened to be studying the Bay Area, when something caught his eye.

Later, 60 Minutes gets to the heart of the matter:

Everybody is afraid to tell the truth. Because if we get to the bottom of this, they are worried that it is going to, in some ways, slow down the building boom that is happening in San Francisco.

Everyone's in a hurry.

The time is now, and the White Rabbit is in a hurry; there's no time to waste.

After all, there are fortunes to be made.

Posted by Bryan Pendleton at 10:04 PM No comments:

Sandy, we miss you

Some nice candids from a lovely event in honor of Sandy Hamilton. 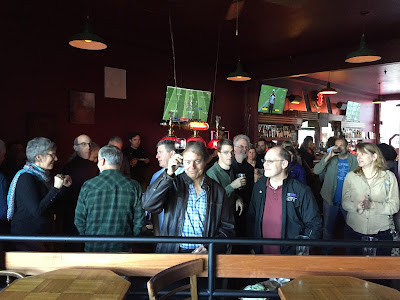 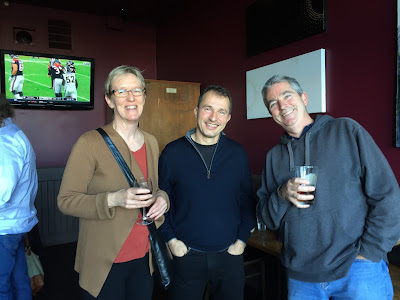 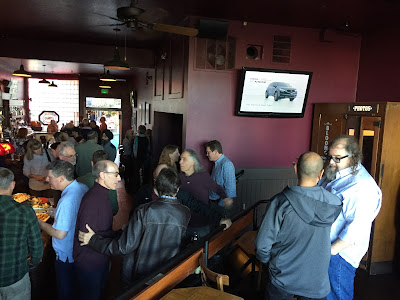 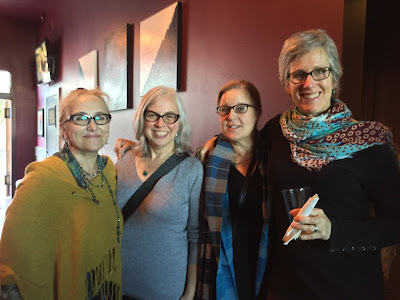 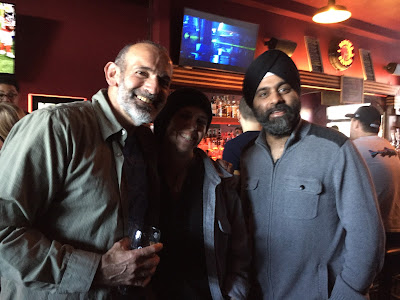 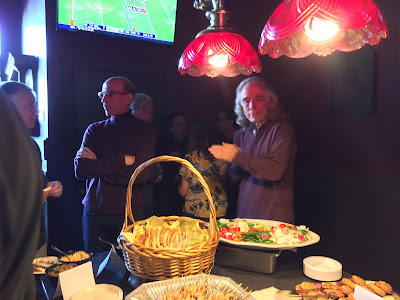 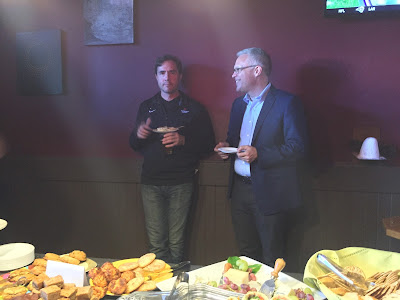 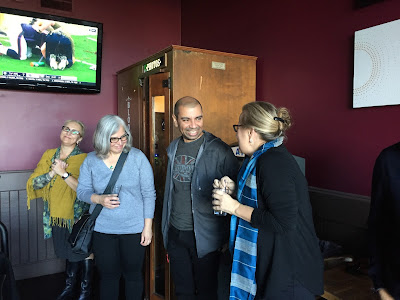 Posted by Bryan Pendleton at 11:14 AM No comments:

As the new San Francisco Transit Center nears its grand opening, do not miss this wonderful interactive exploration of the project and all its impacts on the city, from the Architecture Desk of the San Francisco Chronicle: Symbol of a New San Francisco

... eye-popping novelties and numbers aren’t nearly as important as the long-term question of how the tower will settle into the landscape, once the shock of the new fades away.

“Ultimately, this aims to be a building about San Francisco,” Clarke said last month. He emphasizes such details as the facade’s grid of silvery aluminum sunshades, which relate more to such structural high points as Coit Tower than to the clutter of thin-skinned glass towers nearby.

“Many architects today approach tall buildings almost from a wholly artistic point of view,” Clarke said. “We’re much more comfortable with buildings that feel quietly confident and that ultimately are good citizens of their community.”

But buildings are important.

And this building is important.

And I'm pleased to see how the process is progressing.

We are all evolving.

Posted by Bryan Pendleton at 6:56 PM No comments:

The Tears of Autumn: a very short review

Somebody, somewhere, alerted me to Charles McCarry, and his marvelous The Tears of Autumn.

But it is just so marvelous!

Partly, it's because McCarry is a very elegant writer. There is a certain way in which you are supposed to write This Sort of Book, and McCarry pulls that off as well as anyone:

In Orvieto Christopher found a coffee bar just opening and sat by the window drinking caffe latte, alone with the teen-aged boy who worked the early shift. At eight o'clock the street filled up with Italians, as though the town had been turned upside down like a sack and its people spilled into the morning. Once, after a week in Switzerland and a drive through the night over the Saint Bernard, he and Molly had arrived at the same time of day in Torino. When she saw the Italians again, shouting and gesticulating, Molly had leaped up, spread her arms as if to embrace them, and cried, "The human race!"

Christopher walked through the crowd to the post office and mailed Pigeon's confession and Dieter Dimpel's photographs and Yu Lung's horoscopes to himself in care of general delivery, Washington. The envelope would arrive by registered airmail in four days' time.

But even more than the fluidity and grace of McCarry's writing, what really sets him apart is the efficient and economical way in which he manages his story.

Imagine a modern thriller writer delivering a tale like this, spanning four continents, involving politics, culture, military affairs, language, and so much more; surely it would require seven or eight hundred pages to accomplish. But McCarry handles it in barely two hundred and fifty pages.

Yet it never feels rushed or crowded.

Instead, time and again, as our hero visits some place, talks with some person, or observes some event, what you originally take as "just" color, "merely" background, turns out to be critical information that all falls neatly and precisely into place, at just the right moment.

I'm not sure if I shall find the time to dip back in to McCarry's many other books. Are they all as good as this?

I suppose there's only one way to find out.

Posted by Bryan Pendleton at 7:05 PM No comments: