The west is on fire

They just announced the complete evacuation of the South Lake Tahoe area.

I can't remember this ever happening before.

This is a big deal.

I hope those fire crews can catch a break soon.

Posted by Bryan Pendleton at 12:53 PM No comments: 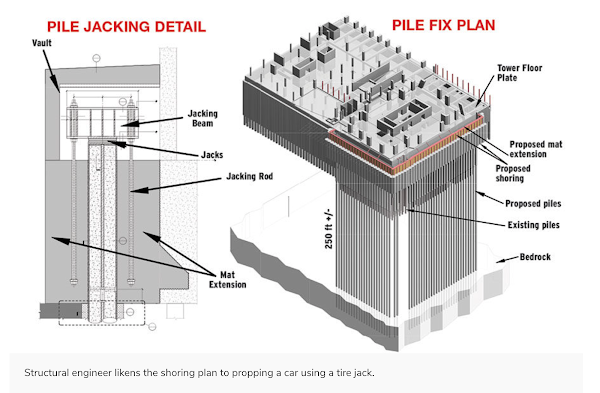 Posted by Bryan Pendleton at 1:23 PM No comments:

We missed our backpacking trip in 2020, but by Spring of 2021 we were all able to get our vaccinations, and we were raring to go!

Unfortunately, the horrible Dixie Fire had other plans for us, rendering our first planned destination unreachable, unbreathable, and wholly out of consideration for this year's trip. With a week to go before our planned departure, we switched to a second backup plan in Siskiyou county, but the Cronan and River Complex fires had eliminated that possibility as well.

With barely 72 hours left, we frantically searched for an alternate plan, but finding a place free of smoke and yet with permits available for last minute hikers such as ourselves was quite challenging. Finally, just as we were ready to give up, we came across a viable possibility, which was to hike up into the upper Walker River watershed in the Hoover Wilderness. Permits were available, and although there was considerable smoke in the area from the Tiltill fire, the forecast was for the winds to shift and blow the smoke elsewhere. 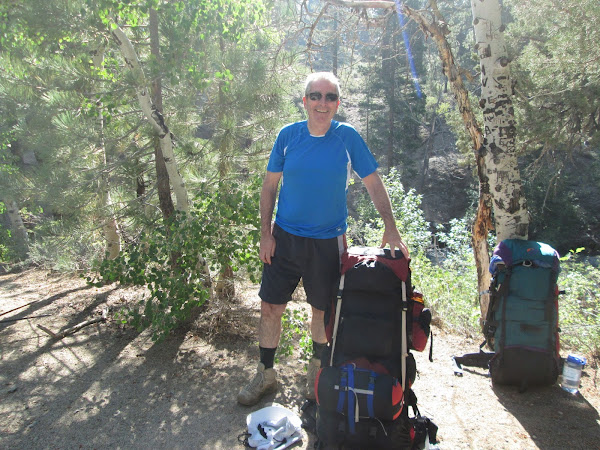 It was time to go, so we got up and went. 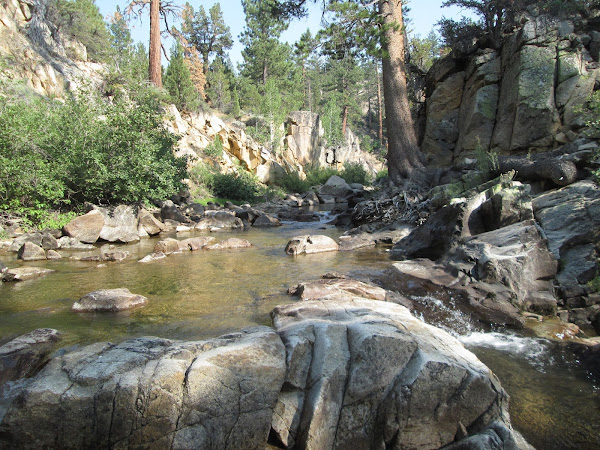 We weren't planning on doing any fishing, but it's always a joy to hike along and camp near the great rivers of the Sierra Nevada, and the approach via Leavitt Meadows was particularly appealing as you can get several miles away from any roads or buildings just by walking the trail along the meadow. This is a very pleasant experience as you can put a lot of distance behind you with relatively little elevation gain.

Above the river we stopped for lunch at lovely Lane Lake, small but ever so picturesque. 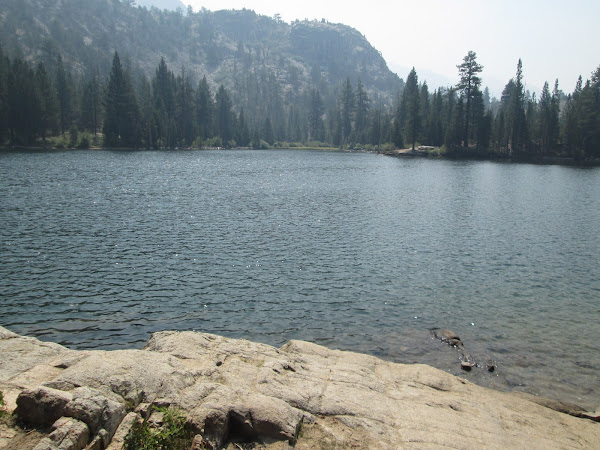 About 1.5 miles beyond Lane Lake, we were able to make our way off the main trail and found a lovely campsite near a beautiful forty foot waterfall on Walker River. Although this has been an extremely dry year, and the river was very low, the falls were still running and very wonderful to view. 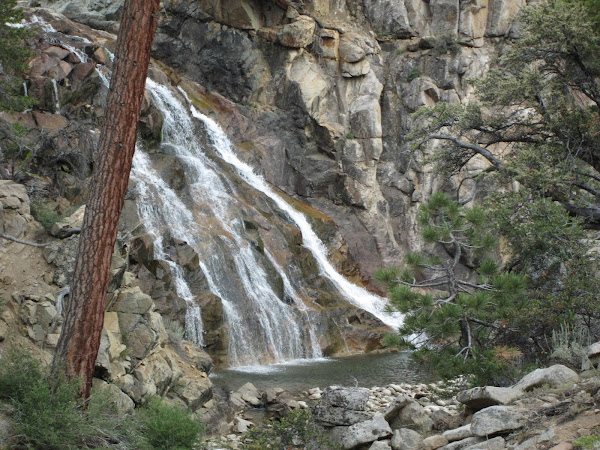 I had recently invested in a Supai backpacker's boat, and Lane Lake proved to be the perfect venue for an afternoon of High Sierra boating. 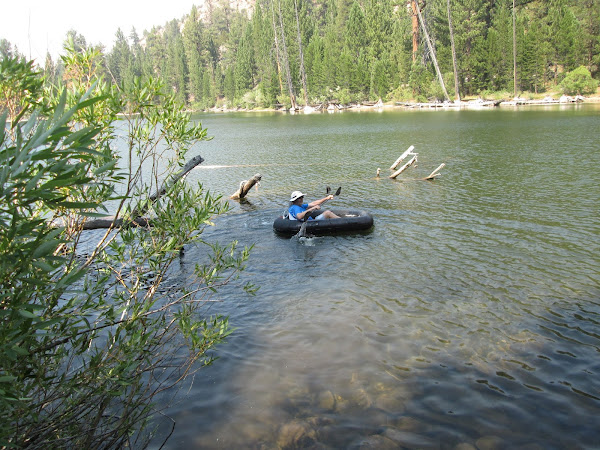 The Walker River watershed in this area is dotted with many other lakes, as well as various tributaries of the river, which has its headwaters near Forsyth Peak in Yosemite National Park. Trips both short and long are easy to fashion in this area, and we certainly enjoyed ourselves.

Because this area is so accessible and quite popular, we saw a lot of other hikers (and not a lot of other wildlife), but the watershed is large and there are plenty of secluded areas where peaceful and quiet campsites can be found. 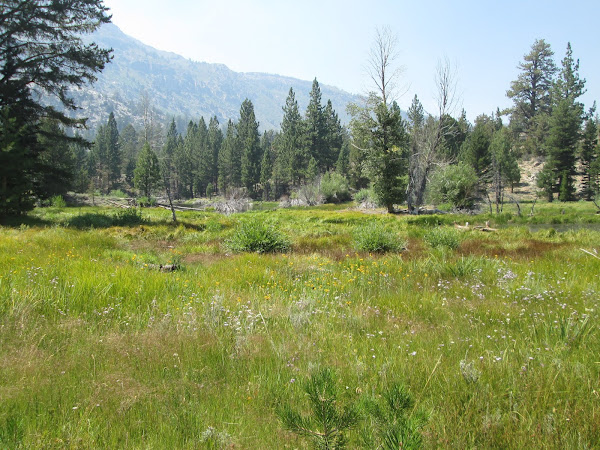 Given the way the trip had nearly ended before it even began, we all agreed that the trip wildly exceeded our expectations, and it was certainly great to be able to go back into the wilderness again with old friends.

Posted by Bryan Pendleton at 3:47 PM No comments:

Jordan Ellenberg is probably the foremost writer in the micro-niche of what I'd call "layman's mathematics books," a speciality that is perfect for people like me (math nut since I was knee-high to a grasshopper, but have very little involvement with real mathematics nowadays).

Ellenberg's latest book is Shape: The Hidden Geometry of Information, Biology, Strategy, Democracy, and Everything Else.

It is, like all of Ellenberg's other work, simultaneously rigorous, educational, entertaining, and approachable, which is quite a hard combination to achieve.

Shape is a serious book, 500 pages of meaty material, and you aren't likely to race through it. You'll either find it fascinating, in which case you'll be stopping every few pages to let what he says settle into your mind, or you'll decide after a few dozen pages that it's not the book for you, in which case that's that.

I enjoy Ellenberg's work, and I hope he continues to write many more such.

Posted by Bryan Pendleton at 12:17 PM No comments:

Klara and the Sun: a very short review

I must first admit that I had not heard of Kazuo Ishiguro before I happened to pick up Klara and the Sun; clearly I've been missing out on the work of one of the great writers of our time.

I loved this book.

I read it very fast, as it is both extremely compelling yet also quite approachable. And, as I read it, I kept having different reactions.

At first I thought: "oh, this is clever! What an interesting idea!" About a quarter of the way through the book, I thought: "I think this would have made a fine short story, but I think he's exhausted everything he came here to say."

But as I continued reading, I found that on the contrary, he had much more to say.

Klara and the Sun is, I believe, deliberately intended to be both thought-provoking and disturbing.

It is also rather topical, which makes me wonder a bit how well it will age: will it still be relevant 75 years from now? Ishiguro takes on topics such as: the ethics of artificial intelligence; the ethics of genetic editing; equity of access to health care; equity of access to education; the increasing isolation and remoteness brought upon us by technology; job displacement by technology; and much more.

It's also quite clearly drawn from the last 18 months of global shelter-in-place, as one of the main characters is a young child, confined to her home, without playmates, being educated by remote professors over video hookups, sufficiently withdrawn that her family takes her to "interaction parties" where she can (with adult supervision) learn how to interact with other home-sheltered peers.

Other aspects of the book are more universal and timeless, such as the sub-plots involving the invocation of prayer and the search for a greater power in the presence of hopelessness and pain, and the observations about human relationships and how they change as we age.

I think that many different people will find many different things to say about Klara and the Sun. For me, I think I will stop with these two observations:

Posted by Bryan Pendleton at 2:02 PM No comments: