It was that time of year again, so I packed up the pack, loaded up the car, and headed off with the gang.

We spent the night in Bishop so we could get an early start, and by 9:00 AM we were at the Onion Valley Trailhead. 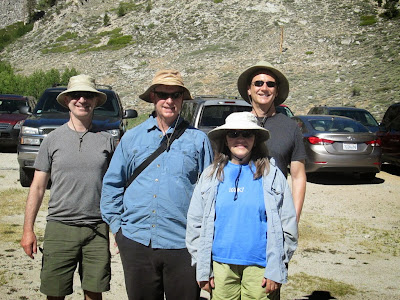 Our destination was Matlock Lake, in the John Muir Wilderness Area. 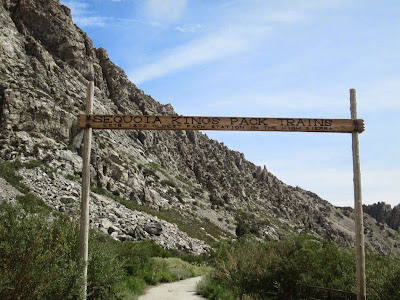 The John Muir Wilderness Area is the most spectacular of all the central Sierra Nevada wilderness areas, and is also the location of the world famous John Muir Trail, surely the most amazing backpacking trail in the lower 48 states. Our trip didn't actually take us on the John Muir Trail, but we came very close to it, and there were many hikers on our trail headed to and from the JMT/PCT (in this area they are the same trail).

Although our hike was short, the elevation gain and overall altitude was substantial: the Onion Valley trailhead is at 9,200 feet, and our campsite was at 10,600 feet; with the various ups and downs of the trail we found that Deb's FitBit registered an astonishing 180 staircases at the completion of the first day's hike. 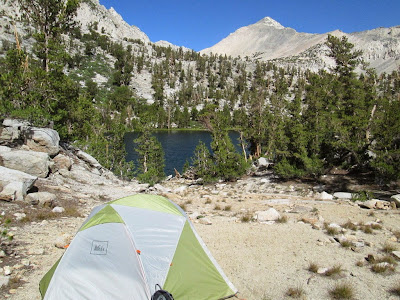 So we were good and tired at the end of the first day!

We were lucky enough to have clear skies, fair weather, and a new moon, giving us near perfect star gazing and an active evening debate about whether or not we were seeing Iridium Flashers.

On the second day we took a cross-country scramble to nearby Bench Lake, a gorgeous hidden lake which is about 300 feet above Matlock Lake. Bench Lake was beautiful and secluded, and the views were marvelous. 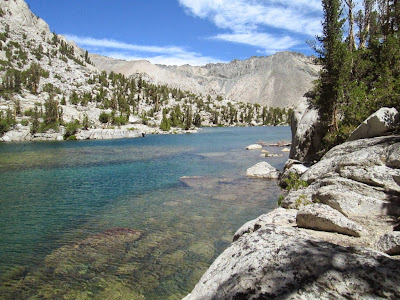 On our third day, we took a trip up and over Kearsarge Pass. At 11,800 feet, this pass was the highest I've been on foot in many years, perhaps decades. Sitting at the pass is an astonishing spectacle, as you can see, simultaneously, more than 60 miles to the east, across the Owens Valley and beyond, and more than 25 miles to the west, down through Kings Canyon National Park and beyond. 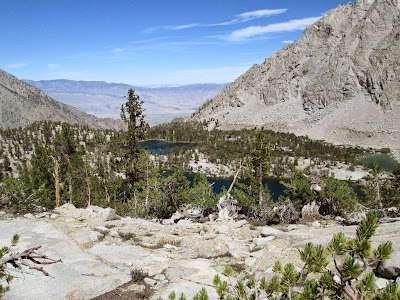 The trail to the pass is well-maintained and pleasant (it has to be, as it is a major mule train pack trail), but the conditions at the pass are not suited for long periods of relaxation; as another hiker at the pass commented, "above 10,000 feet in the Sierras there are only two situations that apply: either the sun is out and you are too hot, or there are clouds and you are too cold."

Indeed it is true. 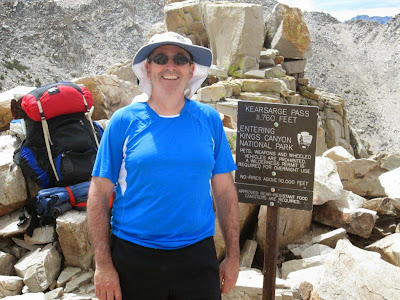 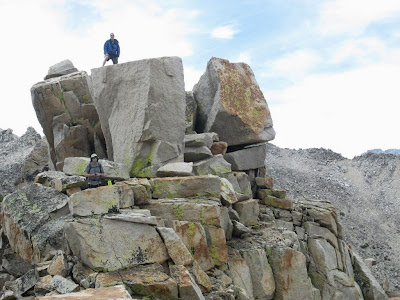 Some of our party extended the hike by dropping down to visit the Kearsarge Lakes and then returning via the pass, while I made it a shorter day by returning straight to Matlock Lake where I had time for an afternoon dip in the lake.

The lakes in this are are at the forefront of a concerted campain to save the mountain yellow-legged frog:

Mountain yellow-legged frogs in the California Sierra Nevada are disappearing at an alarming rate, primarily due to a virulent fungus. UCSB scientists Cheryl Briggs and Roland Knapp are racing to understand why some populations of frogs succumb and others survive, with the aim of not only saving the frogs but also gaining knowledge of how and why organisms develop resistance to virulent pathogen attack.

Of course, your perspective on this may depend on where you are standing: Feds to list frogs as ‘endangered’

A final decision on the critical habitat proposal is expected to be made early next year, but the proposals were met with opposition in the Eastern Sierra, where residents said there is a fear that the designations will close off backcountry access (or at least appear to) and negatively impact the local, tourist-based economy. Some of those fears were validated during the public comment process when it was brought to light that the California Department of Fish and Wildlife had been removing trout from backcountry lakes for several years in an effort to protect the frogs and prevent an endangered species or critical habitat listing.

With fishing season kicking off today, anglers seeking solitude in the remote reaches of the Sierra Nevada are being advised that several lakes that were once thriving fisheries have been cleared of all trout to protect the frogs, which are eaten by the fish in their tadpole form.

Sure enough, there was not a fish to be found in the lakes we visited. As the Inyo Register observed:

In the Independence area, the DFW has removed trout from Bench, Matlock and Slim lake but the higher-elevation waters continue to produce trout. "We have no plans to remove fish from any of those."

It's not clear which higher-elevation waters they mean. 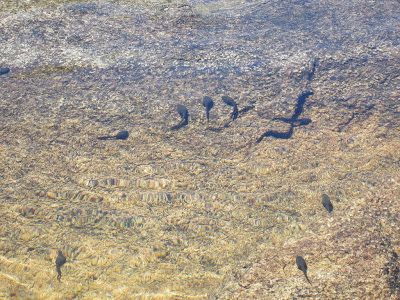 But we definitely saw lots of tadpoles and frogs, so that part of the program is certainly working!

And there is plenty of other life to see in the woods. With campfire restrictions nearly universal in California this year, we were limited to enjoying the wilderness around our camp stove, but I think this is a good thing, for Dead Trees Are Anything But Dead.

After three beautiful days in the wilderness, it was time to get back to coding, so we broke camp and had a pleasant walk down the hill to our cars. 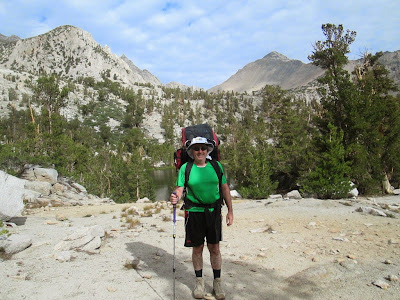 I think it was a good thing we left as we did, for between the massive storm that came racing up from the south and the forest fire near El Portal, we were looking back over our shoulders at storm clouds and smoky skies during our drive home.

Although we might have wished for a bit more solitude, overall this was a near perfect trip for us: the weather was perfect, the scenery was glorious, everything went just as you would hope a backpacking trip would go. 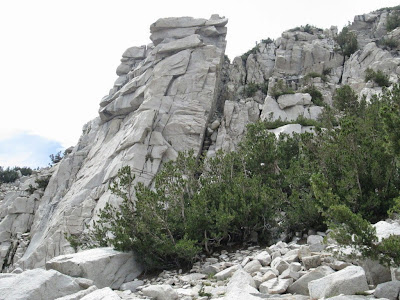 If you're looking for a great place to go backpacking, and you haven't yet tried the Kearsarge Pass trail out of the Onion Valley Trailhead, you should put it on your list.

Posted by Bryan Pendleton at 9:55 PM