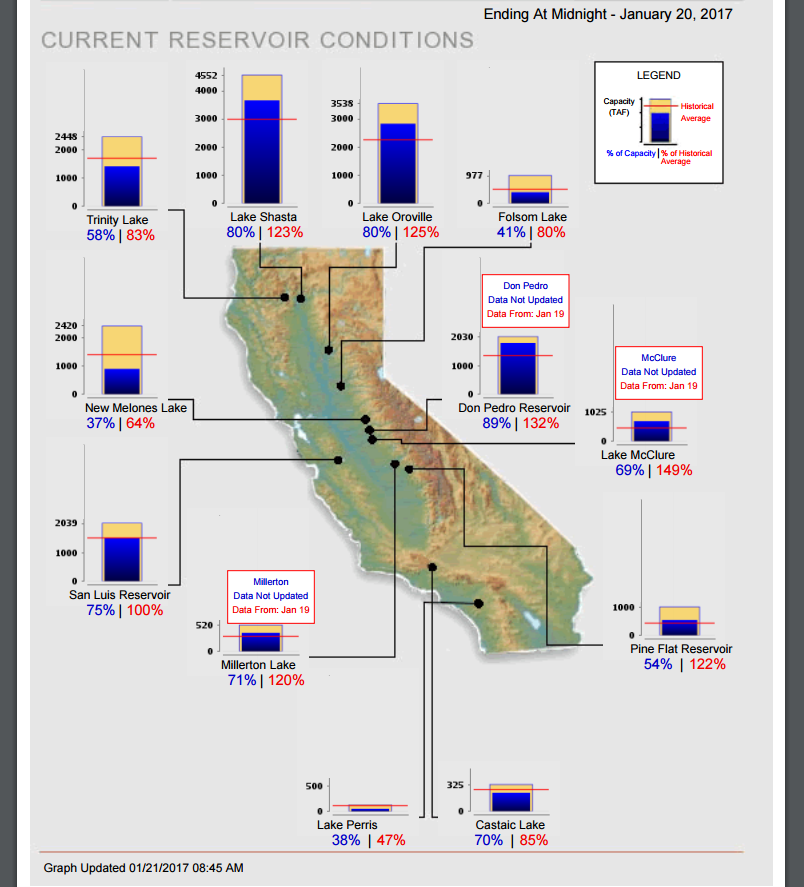 Shasta and Oroville BOTH at 125% of historical average!

Don Pedro is slamming too, already at 90% of capacity (and it's still mid-January!!).

Trinity and Folsom are looking fine, and even New Melones, scraping the bottom just 4 months ago, is up to two thirds of its historical average (we get our East Bay Municipal Utility District supplies from New Melones, btw).

Meanwhile, the 36-hour forecast is for 2-4 FEET of additional snow in the core region of the central Sierras (roughly, the headwaters basin of the Kings River).

The main weather concern now turns to yet another incoming storm which has the potential to be the strongest storm to impact our area so far this season. WV imagery is indicating a moist baroclinic band stretching from 130w out to 170w which is taking aim at central California. GOES high density winds are indicating that this feature is being pulled up by a strong upper low centered near 47n/143w and being pushed eastward straight toward central California. This deep moisture fetch is progged to reach our area by this evening and continue through at least midday Monday. During this time frame periods of moderate to heavy precipitation are expected across our area along with increased winds in favored areas. As the result of the anticipated heavy snowfall and strong winds in the mountains, a Winter Storm Warning has been issued for the southern Sierra Nevada where 2 to 4 feet of additional snowfall are expected over the higher elevations. Snow levels will be between 4500 and 5000 feet on satruday evening when this system arrives and rise to 7500 to 8000 feet by Sunday afternoon in a modified tropcial airmass. As the large offshore upper low approaches the norcal coast Sunday night, cooler air will push into California and snow levels will lower to 3500 to 4000 feet by Monday. Over the Kern County mountains a strong pressure gradient will result in very strong winds on Sunday with gusts up to 90 mph possible in the Grapevine area. The precipitation over the passes will turn to snow on Sunday night as the cooler air pushes in.

Please be careful if you're one of those people trying to drive the Grapevine this weekend. When the road freezes and the wind blows, it's one of the more dangerous roads in the country.

But I bet the Shasta pack is loving this.

Posted by Bryan Pendleton at 9:01 AM