It can be complicated to get the schedules of 6 different people to line up properly, so this year it turned out to be mid-September before we were able to head out on the trail.

But line up the schedules did, and so off we went! 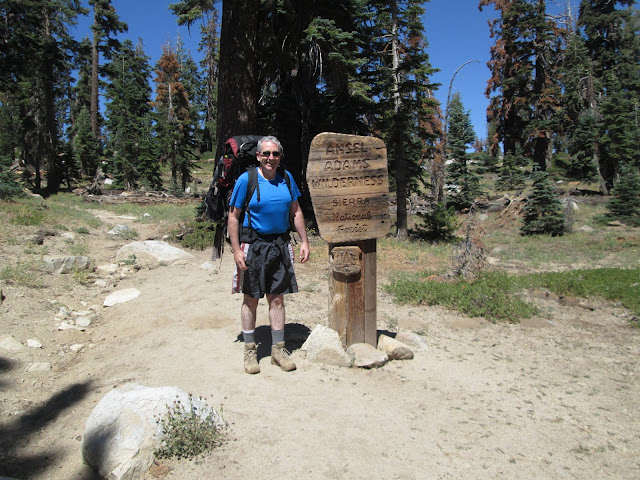 I often refer to this part of the world as "the Heart of the Sierra", as it's full of 12,000+ foot mountains, glacier-carved valleys, pristine mountain lakes, majestic canyons with rushing waterfalls and roaring rivers: just the ticket for a perfect vacation hike! 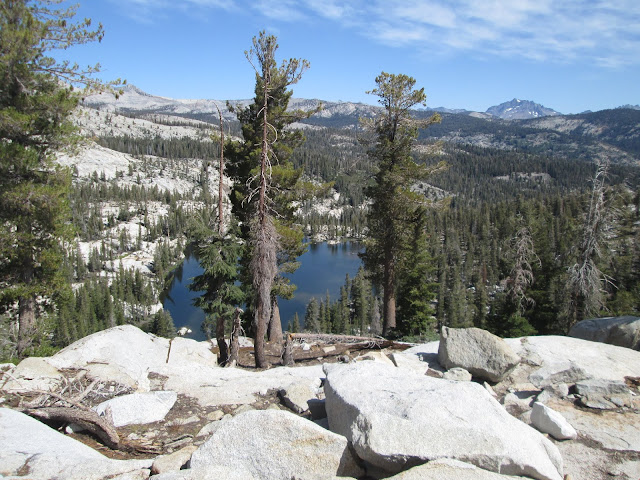 The Ansel Adams Wilderness was originally called the Minarets Wilderness, after the sawtooth formations on the Ritter Range, which maybe you can (barely) see in this picture.

To get to the Fernandez Trailhead on the west side of the Ansel Adams Wilderness from the Bay Area, you've got a journey that breaks down into two parts.

In what might be a first for me, the driving directions in my 2016 printing of Sierra South were incorrect, and we ended up driving to the Norris Trailhead first, then realizing that we were at the wrong trailhead, then retracing our steps back to Beasore Road, then proceeding about 100 yards further down the road, then we found the road to the Fernandez Trailhead. I think that, perhaps, the road to the Norris Trailhead has changed since the book was written, and I just wasn't paying quite enough attention to the (faded) Forest Service road signs. It was but a momentary diversion, though.

To its credit, my Tom Harrison map of the Ansel Adams Wilderness showed the road clearly (I just didn't look at that part of the map closely until I'd already made the mistake, duh!) 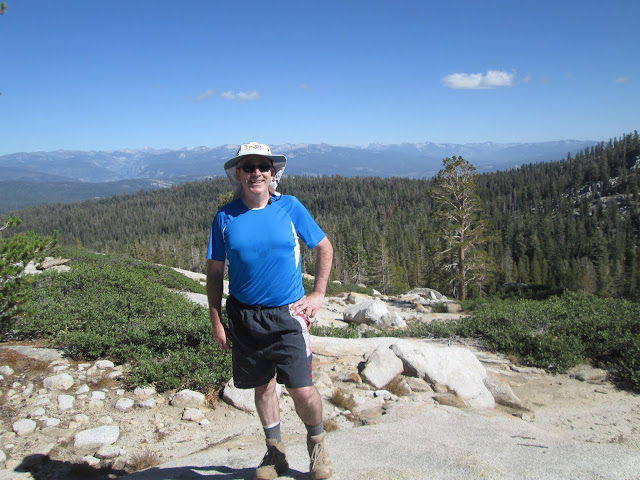 Our hike from Fernandez Trailhead up to Vandeburg Lake was a straightforward climb of about 1200 vertical feet over about 4.5 miles of trail. Fatiguing, especially at 8,000 feet of elevation, but the trail was well-maintained and well-marked.

We had originally been intending to make it all the way to Lady Lake, but by the time we arrived at Vandeburg Lake it was already 4 PM, and there was a lovely existing campsite that matched our group size perfectly, so we declared victory.

We visited Lady Lake the next day, as well as visiting the Staniford lakes which were quite delightful. 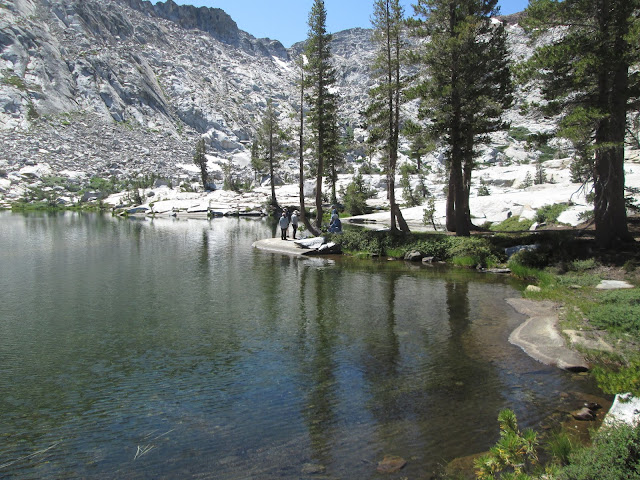 One of the advantages of going backpacking after Labor Day is that the Sierra summer backpacking season is over, and so you (mostly) have the trails and campsites to yourself.

Another of the advantages of going backpacking at the end of the summer is that it is the driest part of the year, so the trails are clear and dry (if a bit dusty), the water crossings are generally not intimidating, and, to a first approximation, there are no mosquitoes!

Unfortunately, one of the downsides of it being the driest part of the year is that most of the mountain wildflowers had already disappeared for the year.

More importantly, another of the disadvantages of going backpacking in mid-September is that summer is almost over, and it is starting to get COLD! During our trip, the high temperatures were only in the mid-60's and low-70's, and the overnight lows were down in the low 30's. 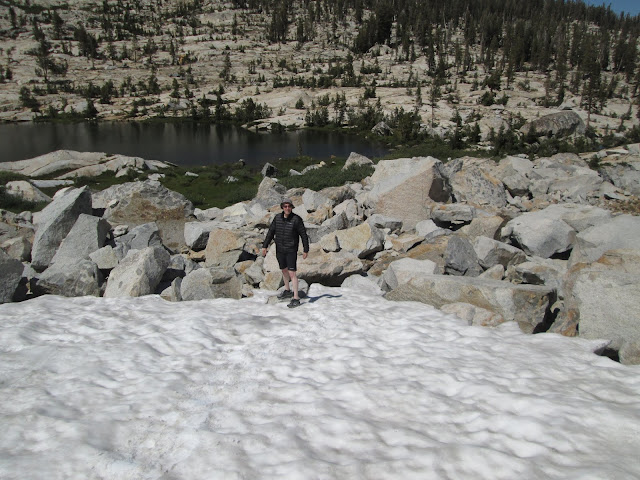 There were even some snow fields within distance of the lake, so we had a snowball fight and I built a snowman. 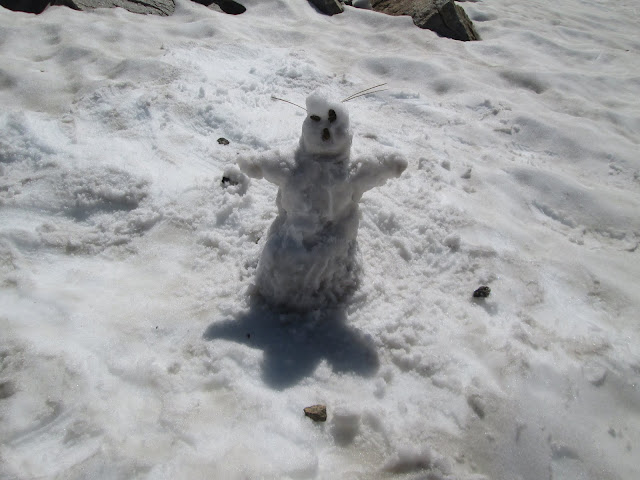 I was glad that I had my nice new sleeping bag, rated for 15 degrees and true to its word.

Yet another disadvantage, which rather took us by surprise, is that late summer, particularly after a long wet winter, is apparently peak season for yellow jackets and other types of wasps. Each day, in the early afternoon, we found ourselves being annoyed and chased about by small swarms of these aggressive and very annoying insects. One of our party was stung twice, including once on his tongue (!), and had to have our "wilderness nurse" remove the stinger with a trusty pair of tweezers.

The UC Davis website has a lot of useful background information about these wasps,

But these are just the ups and downs of backpacking trips, I guess, and for the most part our trip was lovely. 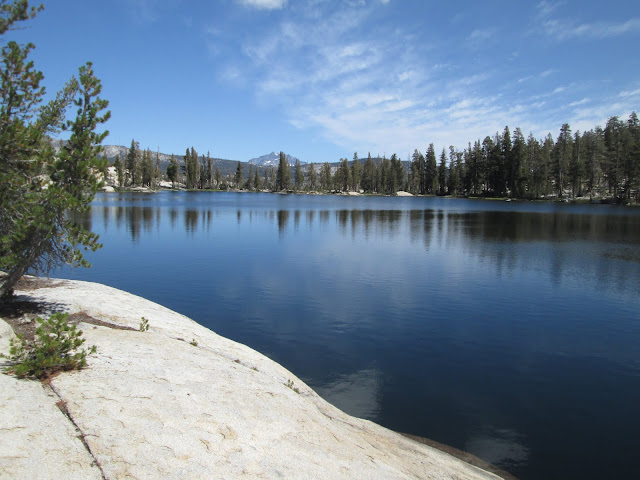 The lakes were lovely. 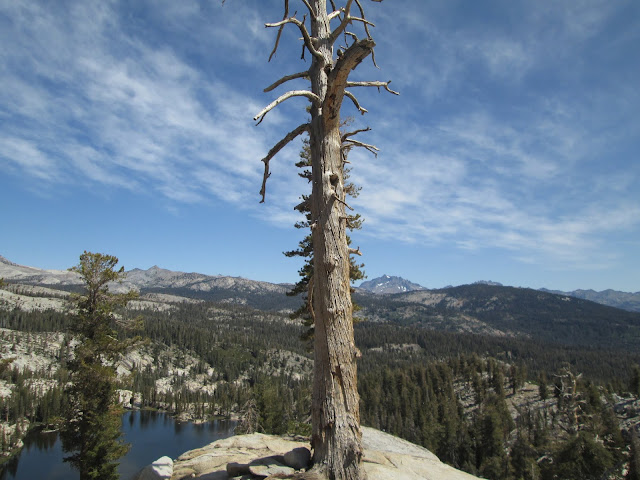 The views were astounding.

Our intrepid fisherman, Rich, caught a fish! It was, I think, a rainbow trout? I don't know much about fish identification but maybe this was a Kern River Rainbow Trout? It certainly seemed much more like a Rainbow Trout than a Brown Trout, even though I think Brown Trout is typically what you find in these parts? 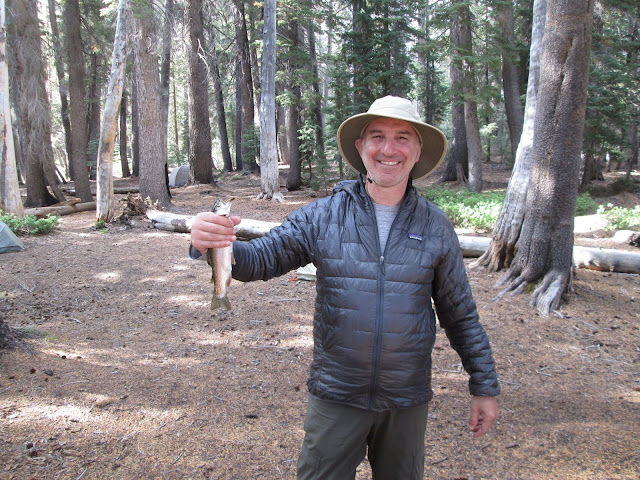 All in all, it was a wonderful trip.

Posted by Bryan Pendleton at 4:27 PM