It's not been easy to find a lot of hard news about the HMS Bounty incident.

Early on, there was some good coverage in the Washington Post:

In the last 36 hours, though, there hasn't been an awful lot to go on. There's been a bit of information in the Christian Science Monitor:

Apparently, from what I've read, the ocean temperature in the area, dead smack in the middle of the Gulf Stream, is an unbelievably warm 77 degrees Fahrenheit, so the hope is that Captain Walbridge may still somehow be alive out there.

Godspeed and best luck to the SAR teams and their personnel; they did wonderful work on Monday and may they have another success yet to come. 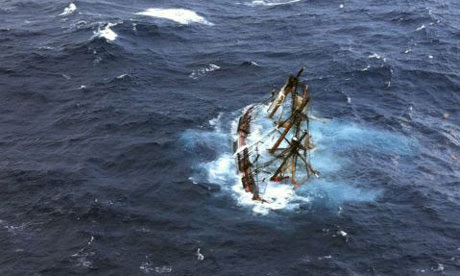 Meanwhile, the final hours of the Bounty remain confusing. As the Monitor notes, lots of questions are unanswered:

The ship’s course out of Connecticut took it due east to try to avoid the oncoming hurricane Sandy. Early on Sunday, the crew felt it had skirted the danger: A Facebook post showed the ship’s position on a map well to the east of the storm’s fiercest winds.

They were mistaken. The ship was close to the tail end of the hurricane as it whipped up the Atlantic coast.

Details about the ship’s final hours remain sketchy. Apparently at least one generator failed, and the Bounty began taking on more water than it could safely handle.

Hundreds of miles from shore, in hurricane conditions, what navigational tools and techniques apply? Were they receiving GPS signals? Were they simply dead reckoning? What caused them to be off by dozens or hundreds of miles?

Reading between the lines, it sounds like they made a navigational error, which placed them in peril, and then suffered a power plant fault, which probably left them simultaneously unable to flee the storm, unable to orient themselves tactically to waves and wind, and unable to operate the pumps which are crucial in removing water faster than it can arrive.

I'm interested in reading more about the story; if you spot good information about what happened on the Bounty during those final 48 hours, do drop me a line and let me know...

Posted by Bryan Pendleton at 8:50 PM