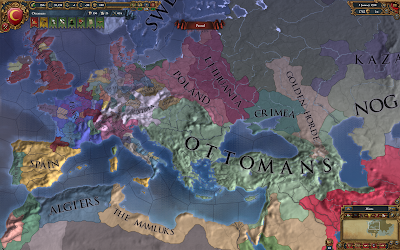 I'm playing as the Ottoman Empire, generally suggested to be the easiest country to play in a single player campaign of Europa Universalis IV.

At this point in the game, the Empire has a solid hold over Asia Minor. Early in the game I stabilized the core territories, taking out Byzantium and Greece, and creating vassals and protectorates of the sultanates to the east.

A long series of land wars enabled me to establish control of most of the land that is modern-day Hungary, Romania, Bulgaria, Greece, Albania, Bosnia, Serbia, Croatia, and Slovenia.

In the Mediterranean proper, I've brought the islands of Crete, Cyprus, Rhodes, Naxos, and Corfu into the Empire, although for whatever reason I'm still failing to grasp the naval aspects of the game very well.

An interesting aspect of the game is the balance between territory and technology. A fairly straightforward approach is to expand the empire, conquering nearby lands and amassing more territory.

However, many of these lands are poor and backwards, and it takes huge amounts of resources, and many decades, to bring them forward.

Meanwhile, smaller countries which are focused on richer and better-developed territories have greatly improved their technology, and are off exploring the New World and the riches of the Far East.

As this is my first substantial campaign in the game, I'm still making vast numbers of mistakes. However, I do keep learning, and I believe that my play is certainly improving.

I'm pretty committed to playing this current game through, as long as I can, to try to learn as much as I can from it, and then I'll consider starting a new game.

I doubt I'll play as the Ottoman Empire the next time, though; it's time to try a different approach from a different point of view.

Posted by Bryan Pendleton at 6:46 PM