The Great Wyoming Adventure: Getting There

You don't really comprehend the vastness of the Western USA until you attempt to cross it.

Nowadays, in our lovely modern vehicles, we zoom across immense expanses of space at lightning speed, but even so, the west is big.

It's about 1,000 miles from San Francisco, California, to Jackson, Wyoming, and to get from here to there, we followed (roughly) the route that the westward emigrants took 200 years ago, such as the California Trail and the Oregon Trail.

Of course, they had to walk, and it took them months; it only took us two days.

Our route took us over 6 mountain passes that were more than 6,000 feet in elevation, including the brain-blowing, car-killing 8,431 foot Teton Pass on the Idaho-Wyoming border, which in barely 10 miles between Victor, Idaho and Wilson, Wyoming, rises 2,500 feet and then falls the same amount, a 10 percent grade up and down.

(The others were Donner Pass, Emigrant Pass, Golconda Pass, and H-D Summit and Goldson Summit on US 93 between Wells, Nevada and Twin Falls, Idaho.)

Practically speaking, though, by following the historical route of the emigrants, what we did was to follow river valleys:

All of these are interesting rivers, but the river that really matters for this story is the Snake River.I'll have more to say about the Snake River in later articles, but for now, take it from me that one of the best ways to get to Wyoming is to drive up the Snake, stopping along the way at beautiful places like this, a turnout on U.S. Highway 26 east of Idaho Falls, Idaho: 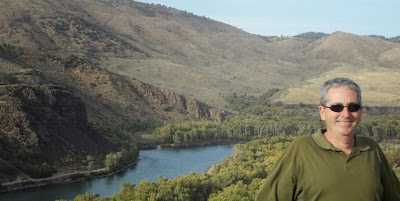 The entire route is rich with both history and scenery. Along the way you pass locations such as:

Now, although they say that "getting there is half the fun," it really isn't. Long stretches of the drive are just straight roads through the desert, punctuated by stops for gasoline at a roadside station in Nevada where the McDonalds has a casino in the back, or a service station in Idaho tucked between immense potato fields.

And eventually, safe and sound but thoroughly exhausted, we made it to Wyoming.

Posted by Bryan Pendleton at 8:14 PM