After the exhausting drive, we had a good night's sleep and woke up excited to explore Grand Teton National Park.

From our hotel, the most direct way to the park is to take the Moose-Wilson Road, but for whatever reason we didn't do that.

Rather, we drove through downtown Jackson and then up U.S. 89 past the National Fish Hatchery and into the park.

This was our first opportunity to see Grand Teton National Park, and so we were drinking it in, stopping at every turnout and overlook, taking pictures of everything we saw.

You're not surprised, are you? That's just who I am.

But the day was beautiful and the views were beautiful and we were enjoying the drive. Here's how the Teton Range looked from Glacier Overlook on the Snake River that morning: 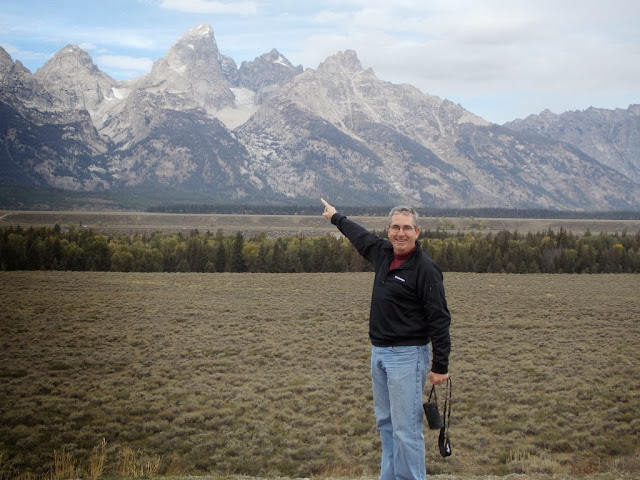 That's the Grand itself in the middle, with Mt. Owen and Teewinot to the right, and Middle Teton to the left. Look how clearly Gunsight Notch shows up in that picture! Note how, aside from the glaciers, the mountains are completely dry (It's the end of the summer, after all, the driest time of the year). I'll, uhm, have more to say about that later on...

Then we came around a bend in the road, and dropped down into an area known as Elk Ranch Flats, and suddenly we encountered our first Wildlife Jam (a traffic jam caused by wildlife).

Spread out across the valley were as many as 1000 bison, some just 40 feet from the highway, others grazing farther away, as far as the eye could see, on both sides of the road, while nearly 50 people were milling around, with cameras and binoculars and viewing scopes, observing and taking pictures. 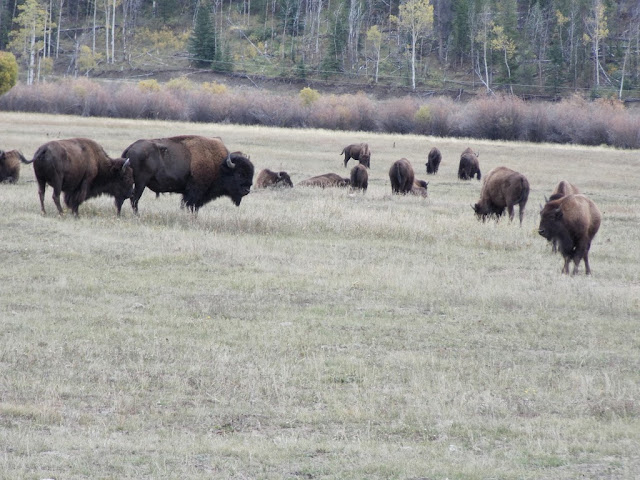 Various pack horses also grazed in the meadown, and there were pronghorn antelope, too, although they were farther back from the road and harder to see. 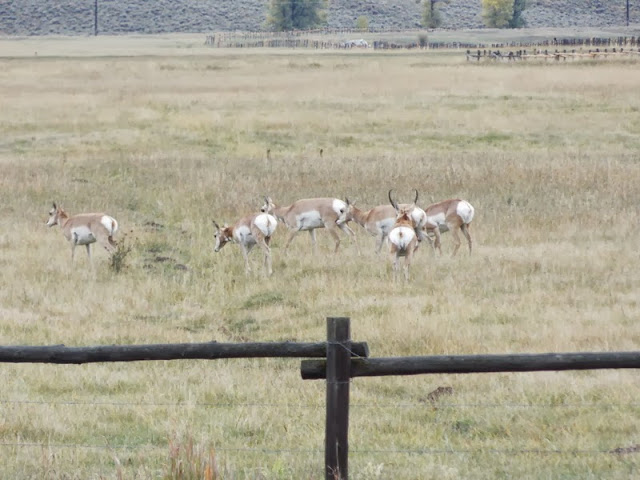 Approaching Moran Junction, at the bridge over the appropriately-named Buffalo Fork of the Snake, a small group of animals moved cautiously in the woods, just out of sight. We speculated that they were some exotic species, but I suspect they were Mule Deer. Here in the Grand Tetons, mule deer tended to be quite dark gray in color.

We stopped for a while at Oxbow Bend, said to be the best place to see moose, but what we saw were cormorants, geese, and ducks. The meadows and marshes were certainly beautiful, though! 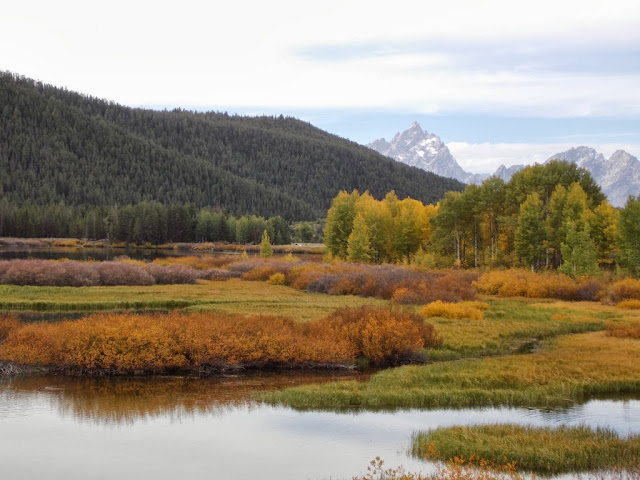 After lunch, we took a lovely walk around String Lake, with a side trip to Leigh Lake. The Grand Teton lakes are just indescribably beautiful; I'll have more to say about them another day, though.

It was getting late, and we decided we needed to start heading back toward our lodge, when, out of the corner of her eye, Donna spotted a solitary, majestic bull elk! We stopped the car and admired as the animal marched proudly across the road and into the meadow across from us, looking carefully around itself as it went. 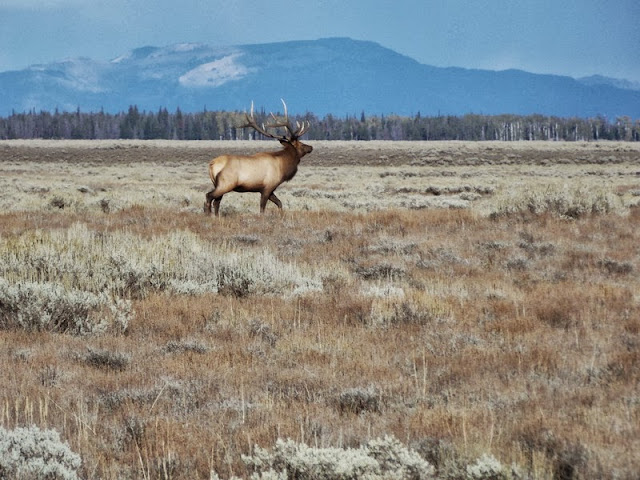 Those are the Gros Ventre mountains in the distance. At this point, we were on Teton Park Road, just south of Jenny Lake, looking east toward the Gros Ventre Wilderness in the Bridger-Teton National Forest. Just south of those mountains is found the National Elk Refuge, where most of these elk head to spend the winter months. The National Elk Refuge actually pre-dates Grand Teton National Park: the refuge was formed in 1912, while the park itself wasn't established until 1929.

We had many other adventures that day, and we were destined to see many more animals on our trip, but truly our first day in Grand Teton National park was The Day of the Ungulates!

Posted by Bryan Pendleton at 7:32 AM