Grand Teton National Park is best known for the signature Teton Range of mountain peaks, among the most recognizable peaks in the country.

But the lakes in the park are as beautiful and worthy of note.

The largest and most obvious lake in Grand Teton National Park is Jackson Lake. Jackson Lake is a natural lake: the Snake River enters it from the north, then exits it to the southeast, becoming the Snake River again. In 1916, an artificial dam was constructed atop the Jackson Lake outlet, raising the water level 30 feet and greatly increasing the surface area of the lake. (Note that this was nearly 15 years before the national park was formed, and Jackson Lake actually didn't become part of the national park proper until 1950.) The larger, deeper lake is greatly enjoyed for its recreational opportunity.

This year, when we arrived in late September, the water level on Jackson Lake was down to its natural level: all the artificially retained water had been released during the summer by the Bureau of Reclamation. An interesting article from this summer's Jackson Hole Daily discusses this in more detail: Thirsty Idaho draining Jackson Lake

Tougher water standards in California equal a dairy industry move to Idaho, and that means a need for more of Jackson Lake’s water, he said.

"There’s just not as many small grains and beans in Idaho as we’re used to," Beus said. "The dairy industry is moving from California to southern Idaho."

Whatever the reason, by the time we got there, no boating was occurring on Jackson Lake. Colter Bay Marina was empty, and the marina docks were resting on mud flats, hundreds of yards from the nearest waterline. This also affected famous scenic locations such as the Jackson Lake Lookout, which no longer framed the Grand in a perfectly mirrored display, but rather showed it perched above a long and muddy valley floor.

All of that was, in the end, fine with us, as we weren't planning on spending much of our time on Jackson lake anyway.

Two lakes where we did spend much of our time were String Lake and Leigh Lake. After lunch on our first day in the park, we were both eager to get out and stretch our legs, and, well, I'd done all that research on various hikes, and so what were we waiting for? 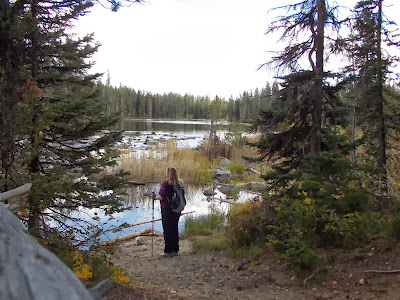 The String Lake trailhead is in a small parking lot at the south end of the lake. The trail meanders around the shoreline of the lake. At its north end, String Lake joins with Leigh Lake, and we took a short side trip to view this beautiful lake, with Mt Moran in the distance. The end result was a delightful 4.2 mile hike, with great scenery throughout. 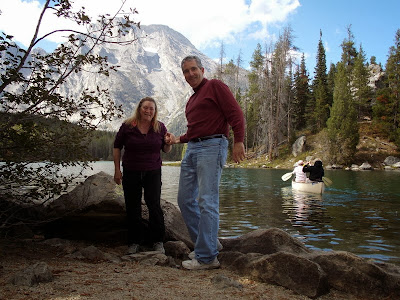 The most well-known lake in Grand Teton National Park is Jenny Lake, named for Jenny Leigh, a Shoshone Indian who married Richard "Beaver Dick" Leigh and settled in the area in the 1870's (and inspired books such as Jenny of the Tetons!).

Jenny Lake is the most popular destination in the park, often called "the heart of the park", and for good reason. I was determined to take advantage of the good weather while it lasted, so on our second day in the park we drove over to the Jenny Lake Visitor Center and caught the boat shuttle run by Jenny Lake Boating

The boat shuttle is great! Super comfortable, wonderful views, an entirely pleasant way to get across the lake. 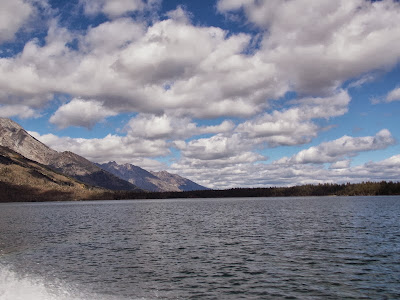 On the other side of Jenny Lake, we hiked up to Hidden Falls, then over to Inspiration Point for the views. Even though these were short hikes, the combination of the elevation and the gain of several hundred feet during the hikes made them quite fatiguing, so although this hike was much shorter than the String Lake hike, it seemed that we were just as tired.

Lots of people said that you could see moose just off the Jenny Lake Trail near where it meets the Hidden Falls Trail.

We didn't see any moose there. 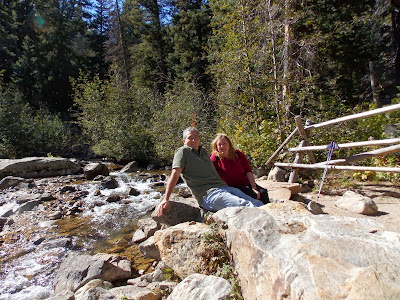 Other very well-known lakes in the park include Bradley Lake and Taggart Lake, which have some great trails that I was planning to take, but which were very busy with bear activity when we were there, and Phelps Lake, which had the same problem (but more about all of that on another day).

We had also considered taking the hike around Two Ocean Lake, but the road to the trailhead was closed due to budget cuts.

But on one of our last days in the park, with the weather greatly influencing our choices, we found perhaps our favorite lakes of all: Heron Pond and Swan Lake.

Leaving from the (silent, empty) Colter Bay Marina at about 9:00 AM, we had the Hermitage Point Trail completely to ourselves. Hiking quietly through the snow-covered woods, we reach first Heron Pond, then cross over to the Swan Lake shoreline for the return trip. 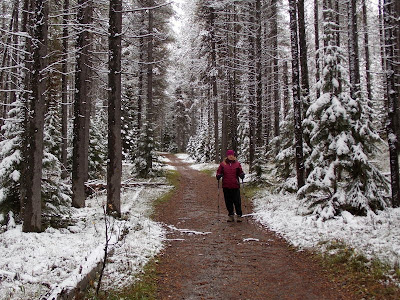 These are small lakes, mostly covered in lily pads, with multiple beaver lodges in each lake. We stood quietly on the shore of each lake, scanning the water with our binoculars, and were treated to a buffet of waterbirds: duck, goose, scaup, goldeneye, teal, and more.

As we were leaving, a pair of mule deer walked silently through the woods, startling us when they passed just 10 feet in front of us. 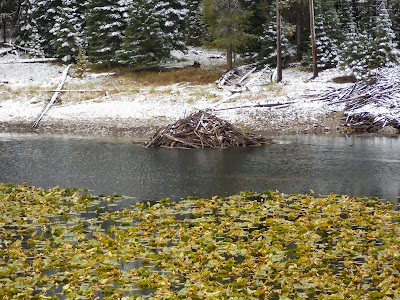 We did all of these, and the lakes were certainly one of the highlights!

Posted by Bryan Pendleton at 6:26 PM