Our trip to Wyoming involved a number of pleasures, but a major aspect was the chance to see less common animals in the wild.

As far as I can remember, here's our final tally:

Wild animals that we actually saw in the wild:

These are female Bufflehead, right? 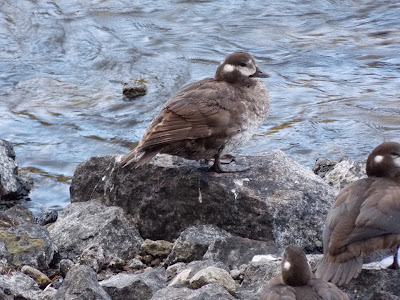 Wild animals that we hoped to see in the wild, and which do live in the wild in this part of Wyoming, but which we only saw in captivity:

Some other birds that we saw at that Teton Raptor Center

We saw a lot of birds that you might find unusual, but which were pretty common sights to us, living as we do right between several bird refuges:

Perhaps the most interesting were the animals that we didn't see in the wild.

The most surprising omission was moose. Time and again people would tell us they had just seen a moose:

Maybe they all went south.

So all we got, in the end, moose-wise, was this: 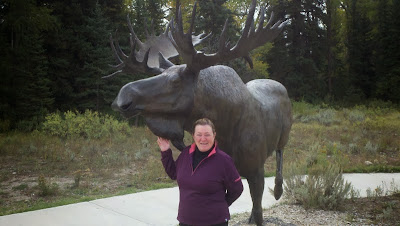 Another surprising omission was beaver. We must have seen 6 or 7 beaver lodges, beautiful, large, and clearly recently built and in active use, but we never saw any beaver.

Were they all inside the lodges? What do beaver do in late September?

I have no doubt that, had we but more time, we would have seen many more animals, and many more types of animals. To see the most exotic animals (wolves, bighorn sheep, wolverines, mountain lions, bald eagles, grizzlies), you have to get into the backcountry, and you have to be prepared for all that implies.

But there were many, many fascinating wild animals that can be seen from the roadway, or just a short hike away. You just have to slow down, be patient, and keep your eyes open.

Want to see some wild animals? Go take a trip to Wyoming!

Posted by Bryan Pendleton at 8:39 PM