As I mentioned before, one of the nice things about staying at the Jackson Hole ski resort is that we were barely a mile from the entrance gate to Grand Teton National Park.

Just through the gate, the first region you enter is the Laurance Rockefeller Preserve.

We were hoping to fit one more hike in before we left for Yellowstone, and the Preserve's hiking trails are widely regarded as among the park's best, so we popped into the car and headed up the road.

Before we even pulled in to the parking lot, the happiest bear you'll ever see was perched eight feet up in the top of a berry tree, eating berries like there's no tomorrow (which, one imagines, is exactly how the bear feels). 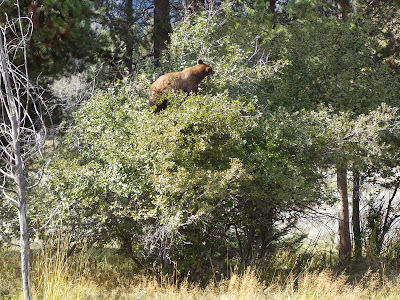 During September and October, the Grand Teton black bears come down from the mountains, and gorge themselves on the various berries that grow near the Snake River:

We stood with the group and admired the bear for 15 minutes or so, then decided to move on for our hike.

But we barely made it out from the trailhead, just past the visitor center, when we encountered another group of people standing on the trail. They told us that the bear was on the trail, just around the corner.

We stood, and waited, and watched, and then, sure enough, a beautiful big black bear strolled out from around the corner, took a quick glance at our group of people, and then walked into the bushes across the trail.

We barely blinked and there the bear was, 10 feet up a big aspen tree, leaning over to (you guessed it) eat some more berries.

Just then, another couple came walking down the path from the woods. Unknowing, they walked right under the bear!

The bear didn't care though; it just kept eating those berries. 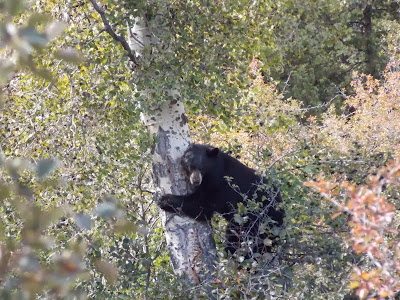 We hung out with the group for a while, talking excitedly, snapping lots of pictures, watching the bear eat berries.

After a while, we decided that we really didn't want to take a hike on the Path Where The Bears Eat Berries Above Your Head, so we turned around and headed back to the Visitor Center.

Which was closed, due to budget cuts.

When what should we see but (can you guess?) a bear, standing on its hind legs, reaching up to pull down the branches of a yummy berry tree. 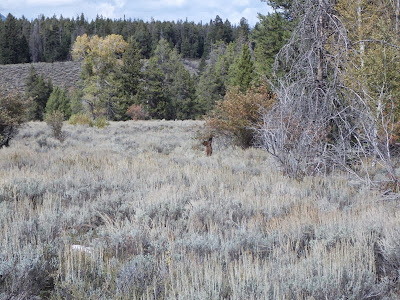 (You might want to click on this picture for a larger view, as it's a bit hard to see the bear at first.)

In the end, I can't tell you much about the trails that run through the Laurance Rockefeller Preserve.

And, I can't tell you much about Phelps Lake, to which those trails lead.

And, I can't tell you much about the Visitor Center.

But, one thing I can definitely tell you: in late September, when the berry bushes in the preserve are at their peak, and winter is just around the corner, there is no better place to see black bears eating berries than the Laurance Rockefeller Preserve in Grand Teton National Park.

Posted by Bryan Pendleton at 5:40 PM