Yellowstone National Park is also well-known for its waterfalls.

In fact, it was a waterfall that, indirectly, led to the creation of the park. During the Hayden Expedition of 1871, a gorgeous painting by Thomas Moran entitled Grand Canyon of the Yellowstone was shown at the Clinton Hall in New York City, convincing Congress to take action on preserving Yellowstone as America's first National Park:

New York's reception of "The Great Canyon of the Yellowstone" was tremendous, and reports of the evening in Clinton Hall painted Moran and his work in terms as colorful and magnificent as one of his canvases. Moran then sent the painting to the Smithsonian, where it was displayed for two weeks before moving to the Speaker's Office in the Old Hall of Representatives. Moran's intent was to entice Congressmen to view it at the Smithsonian, but he said that "it was useless to continue its exhibition at the Smithsonian, so far as getting Congressmen to see it was concerned," and so he managed to secure a place in the Capitol, where he noted that it had "created quite a sensation." (Kinsey 64) During its stay in Washington, the painting struck Congressmen and visitors to the Capitol with the awe of the scene Moran depicted, and Moran himself lobbied tirelessly with Congressional acquaintances to secure a purchase. On June 10, 1872, Moran's persistence was rewarded as Congress appropriated $10,000 for Moran's painting, an extraordinary sum at the time. After a multi-city tour, it was placed in the Senate lobby, the first landscape to join the Capitol Collection, and as contemporary art critic Clarence Cook commented, "the only good picture to be found in the Capitol." (Wilkins 5)

Well, something like that surely isn't to be missed, so I was determined to see the Upper and Lower Falls of the Yellowstone River for myself.

This was proving to be a challenge, as the early-season snowstorm that had engulfed northwest Wyoming was just getting worse and worse. Each day, the conditions on the ground seemed worse, the weather forecast seemed worse, and the warnings from the rangers seemed worse.

Finally, I could stand it no more, so we determined to make a push into the park and try to get to Canyon, even though many of the roads were currently listed as "closed", or as "snow tires and four-wheel-drive required".

We bundled up, packed our gear, and headed north.

Happily, the conditions were not as dire as forecast, and once we made it over the Continental Divide near Lewis Lake, the roads improved substantially and the drive from Fishing Bridge to Canyon was trouble-free.

It was Just Too Cold to attempt Uncle Tom's Trail, so we settled for the wonderful views of the Upper Falls from the trailhead, then wandered down to the end of the road to Artist's Point, from where Moran made his sketches 142 years ago.

The view from Artist's Point is everything it is claimed to be; if there is a more beautiful waterfall view it is hard to imagine. Perhaps Yosemite Falls on a bright June afternoon is a match for this, but Yellowstone Falls is pretty special. 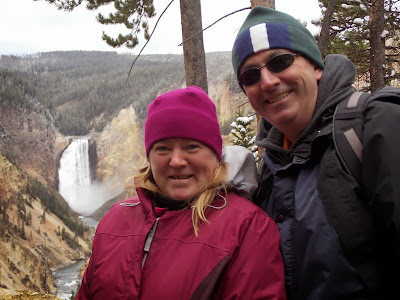 We lingered as long as we could, then reluctantly moved on. After a short but enjoyable stop at the brink of the Upper Falls on the North Rim, we took a serious look at the weather and started making our way back.

Our plan, which we stuck to, was to drive all the way to Canyon first, make sure that Bryan Saw His Waterfalls, and then we could stop along the way back.

The road from Canyon to Fishing Bridge leads through a region that many consider to be the most beautiful part of Yellowstone: Hayden Valley, named, of course, for Dr. Ferdinand Vandeveer Hayden, the Oberlin College graduate, U.S. Army geologist, and Smithsonian Institution explorer who led the crucial 1871 expedition into what would become Yellowstone National Park.

Although we were hoping to see some of the wildlife for which Hayden Valley is so famouse, we weren't treated to any dramatic displays. But we saw

So that was pretty good.

And, oh, by the way: yes, the valley is just gorgeous 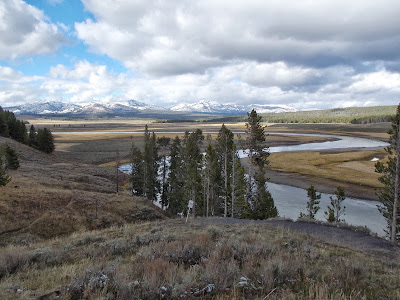 Now, I don't want to give you the impression that the Yellowstone River waterfalls were the only ones we managed to see. Unfortunately, Dunraven Pass, named for the Earl of Dunraven, was closed the entire time we were there, so there was no hope of making it over to see Tower Falls.

In fact, there are so many waterfalls in Yellowstone Park that you can find entire books devoted just to unknown Yellowstone waterfalls, a topic to which Tim Cahill devotes an entire chapter of his own book on Yellowstone.

As for us, we managed to see Lewis Falls, a well-known stop along the South Entrance road. 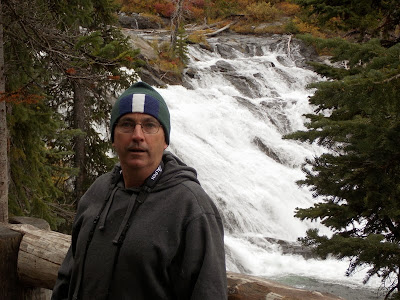 And, we enjoyed our stop at Moose Falls, just inside the South Entrance of the park. 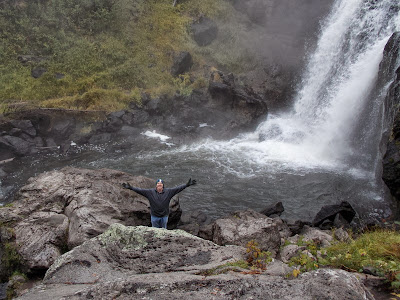 And Grand Teton National Park has a few waterfalls of its own, including the picturesque and popular Hidden Falls. 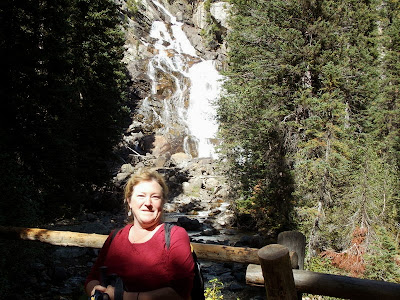 However, I do have to admit that this, although very enjoyable, and very entertaining, is not actually a waterfall: 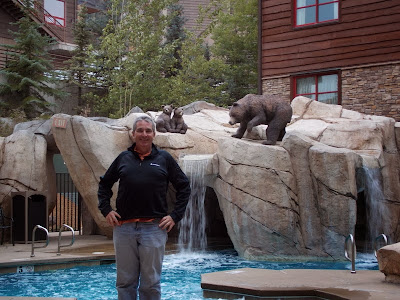 I am, obviously, rather a waterfalls fanatic, the sort of person who will easily make the decision to take a 30-mile detour to view something described in a guidebook as "a seasonal fall, but pretty when it's flowing."

Moreover, living as close as I do to Yosemite National Park, I am rather spoiled, as Yosemite must surely be reckoned as the Queen of the Waterfalls when it comes to National Parks.

But the waterfalls of Yellowstone and Grand Teton are wonderful as well, and I most certainly was pleased that I managed to get to see as many of them as I did.

Posted by Bryan Pendleton at 7:47 AM