On the final day of our trip, we somehow weren't quite ready for the adventure to end.

So we arranged to take the long way home.

We took a small detour and went through Montana, in order to stop at the Grizzly and Wolf Discovery Center.

In truth, this is a bit of an odd place, although we both enjoyed our visit very much, and were pleased that we went.

The GWDC is a non-profit organization, and its primary mission involves the notion of the "nuisance bear".

The bears at the Grizzly & Wolf Discovery Center had to be removed from the wild because they were becoming dangerously comfortable around humans. Their stories help share a valuable lesson of how people can take the proper steps to ensure bears stay forever wild. The wolves at the Center are ambassadors, providing a greater understanding of this predator in the Yellowstone ecosystem.

The center has been through several changes of management, and it seems to have wobbled a bit on its course, at times being more of a zoo or tourist attraction.

However, they currently seem committed to their conservation and education agenda, which I think is wonderful. 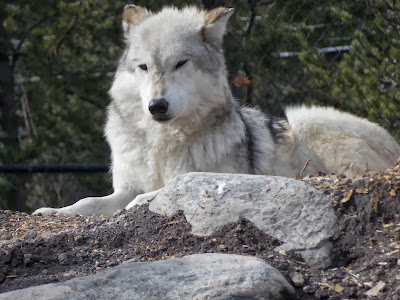 There are three major groups of animals at the center:

We were lucky in our arrival: we arrived just as the River Valley Pack were being fed, and were able to watch them during that time.

Then, about 30 minutes later, the bears were rotated, and we were able to watch 5 different grizzlies all enter the outdoor area, searching out the various food that the keepers had concealed in the exhibit.

It was bitterly cold when we were there: at high noon, I think I checked and the temperature was 31 degrees! But it didn't seem to bother the wolves nor the bears, and since there weren't many people that day, we had the most amazing opportunities to wander about and look at all the animals to our heart's content.

In theory, you might get a chance to see a wolf in Yellowstone park; there are certainly wild wolves there. But it's very unlikely, unless you work very hard: know what you're doing, hike into the backcountry, commit multiple days to the effort. More likely, you might hear a wolf in Yellowstone, perhaps if you were out in the Lamar Valley some evening, or out beyond Sylvan pass.

But at the Grizzly and Wolf Discovery Center, you have an amazing opportunity to see several wolves, from barely a few feet away.

Here, the wolves give visitors an up-close look at their normally secretive lives. The wolves eat, play, reinforce their dominance hierarchy and howl right in front of the viewing areas. 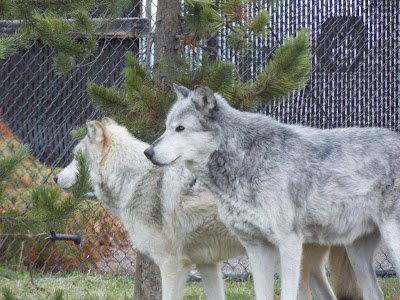 We didn't hear any of the wolves howl when we were there, but we certainly were able to watch them eat and play and wrestle over bones and territory.

While Donna was spending all her time admiring the beautiful wolves, I was enjoying myself at the bear area. When we first arrived, the keepers were just removing the two massive Alaskan grizzlies (one weighs 1100 pounds!), and preparing the compound for the smaller bears from Wyoming and Montana. 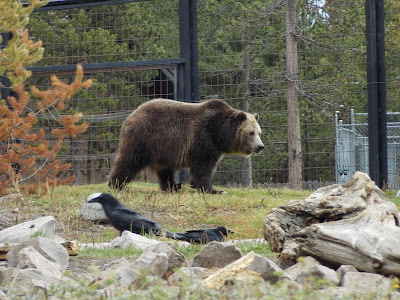 There's almost no way to prepare yourself for the rush of adrenalin and excitement when a grizzly bear comes loping out of the back of the compound, headed for food. These are the most powerful animals you're likely to ever see.

The team also tested what the bears could do to a 700-pound metal Dumpster.

"It was like a beach ball to them," Cairns said. "They could roll it over and over. It took a minimum of two people a concerted effort to tip it."

An interesting part of the work at the GWDC involves testing food storage devices with real bears, in a (relatively) safe environment:

The testing procedures start with the manufacturer bringing their product to the GWDC. Then, it is placed in the bear habitat and baited with especially enticing foods such as fish, meat, molasses or fruit jam. After that, the bears must try to get into the container for 60 minutes for it to be considered tested. If they are unable to open the container or obtain food from it, the container passes as "bear-resistant" and receives certification from the Interagency Grizzly Bear Committee (IGBC).

There were five bears in the compound when I was watching, and even though there were very nice signs and displays describing each individual bear and its history, I wasn't alert enough to really tell them apart.

I did particularly like watching Grant and Roosevelt, though. After they were done feeding, these two bears wandered over to the side of the bear area and wrestled for a while. If you've never seen two 500 pound bears wrestling 30 feet away from you, well, you've really missed a treat!

The raptor area, while small, was clean and well-kept. In separate cages, we saw two bald eagles, two golden eagles, and a great horned owl. 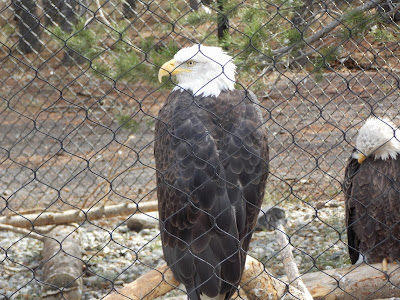 After a full week of watching wild animals in the wild, in both Grand Teton and Yellowstone, it was decidedly a different experience to see grizzlies and wolves and bald eagles in captivity.

It's clearly not the same experience at all.

And if you get a chance to go to Yellowstone, and you want to visit the Grizzly and Wolf Discovery Center, go. You'll enjoy yourself, and you'll help support an organization that, at the very least, really cares about the animals that they're trying to conserve and protect.

Posted by Bryan Pendleton at 8:33 AM