The Great Wyoming Adventure: Fire in the Mountains

When a co-worker heard that I was about to take a trip to Yellowstone National Park, he gave me a bit of a funny look.

Any trip to Yellowstone these days is framed in the signature event of the last half-century: the 1988 Yellowstone fires, which burned 1.4 million acres, including 800,000 acres within the boundaries of the park, exactly 25 years ago this summer.

Yes, you read that right: 1.4 million acres. In a single day, August 20th, 1988, called "Black Saturday" at the time, more than 150,000 acres were burned. The park as a whole contains about 2.2 million acres, so about one third of the total park was burned during the summer of 1988, including essentially every area that we visited during our time there.

My co-worker, you see, had traveled through a blackened wasteland.

"It was pretty weird," he said to me.

Even before we made the trip, fire was on my mind, as I had been riveted to the news of the Rim Fire closer to home. And I was also paying close attention to this summer's Druid Fire Complex in the park, as it was threatening to affect visitors to the park.

I've been enjoying America's mountain wilderness for decades, and am no stranger to the issues of fire in the backcountry, but I knew, at some level, that the 1988 Yellowstone fires were a different thing altogether.

It's hard to appreciate what that summer was like. Recently, the New York Times put together a fascinating video retrospective: Lessons From the Yellowstone Fires of 1988.

So it was in this overall context that we embarked on our adventure.

And fire was certainly part of our experience:

And yet, if I hadn't known this ahead of time, if I hadn't read about it and studied it and planned to look for it, I don't think I would have known.

When we were there, the world looked like this: 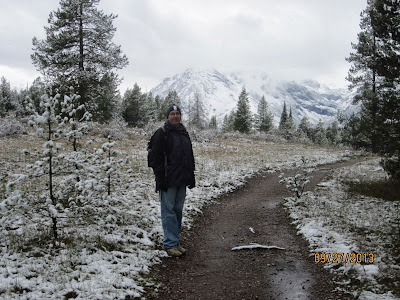 Northwestern Wyoming is a magical place. I've been through a lot of wilderness, and seen a lot of country, and I can't recall ever being in a place so wild, so natural, and so healthy. Plants and animals were everywhere, growing and living and thriving. The water was pure; the air was clean; everything was alive.

Here, in coastal California, we are in what they call the "Red Flag" days: those few weeks in October where, every year, the winds shift, reversing their normal pattern and blowing from the mainland back toward the ocean.

For those of us living here, these are the nicest days of the year: warm, dry, sunny, delightful.

But for firefighters, this is a time of maximum alert. In 1991, the horrific Oakland Firestorm arose during the Red Flag days of fall, and every year we must be particularly careful and aware during this time.

Fire is on everyone's mind nowadays. The Yarnell fire report is out, and firefighters across the nation are studying its recommendations on dealing with treacherous weather conditions, and considering how to manage the tradeoffs between structure protection and firefighter safety. In Missoula, Montana, the Forest Service Fire Sciences Laboratory continues their pioneering work in understanding how fire behaves, and how we need to co-exist with it.

Meanwhile, closer to home, although the Rim Fire isn't quite "over" yet, there are already signs of what will come next: Following Yosemite Rim Fire, Regeneration Begins

In his wonderful book, Hawk's Rest, Gary Ferguson discusses some of the aftermath of the 1988 fires:

In studies done 12 months after the 1988 fires, almost a third of all the new plants in burned areas were lodgepole pines. On good soil, soaked with sun and freshened by loads of nutrients leached from the ashes, seeds were sprouting at the extraordinary rate of 300,000 per acre. Tens of thousands more ended up as food for squirrels, mice, and birds. Since most lodgepole seeds tend to disperse within several hundred feet from the parent tree, it's safe to assume that the stock for much of this new timber came almost entirely from that which was lost to the burn in the first place. Therefore, what was lodgepole forest before 1988 will be lodgepole forest again. During the autumn following the fires Wyoming Senator Alan Simpson told the Senate that the park "may well have been destroyed by the very people who were assigned to protect it. The ground is sterilized. It is blackened to the depths of any root system within it." Actually, not only was there an early abundance of transitional plants such as fireweed, current, and rasberry, but the vast majority of greater Yellowstone was soon rebuilding the same mix of communities present before the burn.

Fire was certainly a part of our adventure. But it is a part of nature, and we were having a nature adventure.

Posted by Bryan Pendleton at 4:01 PM