One of the places we stayed during our trip was at the Jackson Hole Ski Resort. Not only was it a very nice place to stay, it was ideal for us because the ski resort is barely a mile from the entrance gate to Grand Teton National park on Moose-Wilson Road.

However, staying at a ski resort in the summer is a bit odd, because ski resorts, obviously, are focused on skiing, which doesn't happen in the summer. At Jackson Hole, during summer time, the snowboard equipment stores are closed, the chair lifts are idle, and nobody is wearing those cute multi-colored polarized goggles to protect against snow blindness.

And yet, there is one part of the ski resort that doesn't close down during the summer: the Jackson Hole Aerial Tram:

This is what flying feels like. In 15 minutes, the Aerial Tram glides 4,139 vertical feet from the base of Teton Village to the top of Rendezvous Mountain. The summit offers a staggering 360-degree view of the Snake River Valley, Grand Teton National Park and the Gros Ventre Range in the distance.

So, on a fine Tuesday in late September, we bought a deli lunch from nearby Aspens Market, packed our lunch, our warm clothes and hats, our cameras and binoculars, and took the tram.

The tram car is beautiful: luxurious, comfortable, quiet, and clean. We got seats right on the window, and armed our cameras and binoculars.

Initially, the tram glides calmly over the aspen and pine forest. After a little while, the trees are replaced by shrubs, and then by bare rock. 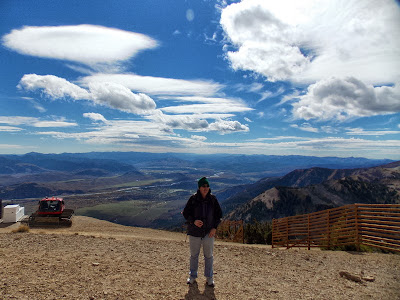 And then, just about the point where you look up the hill and think to yourself

Oh, my! That is an enormous sheer cliff, right in front of us!

the tram suddenly starts to go up, and up, and UP!

My hands were clammy, my knees were weak, and I was just about at the point where I had to close my eyes...

And then there we were. With the slightest of bumps, the tram docks neatly into the loading area at the top of Rendezvous Mountain, the doors slide open, and out we go!

Although we had been prepared for it, the conditions at the top still took us by surprise. It was 25 degrees colder, and, in addition, the wind was blowing at least 35 mph. Quickly we pulled on our fleeces, our jackets, our hats, and our gloves, and took our place in the line of people taking pictures in every direction. 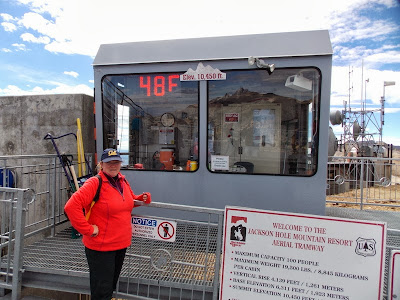 After a few minutes of snapping wonderful shots, we were starting to be unsure if we could feel our fingers, so we ducked into Corbet's Cabin, home of the highest-elevation waffles in the country (in the world?).

We had just finished lunch, but the Irish Coffee was too tempting, so we rewarded ourselves with a warm and tasty drink.

Originally, I had this fantasy that we were going to hike around on the hiking trails on the top of the mountain, but it was just too cold, and we had other things we wanted to do, so after spending another half hour or so enjoying the views and photo opportunities, it was time to move on. 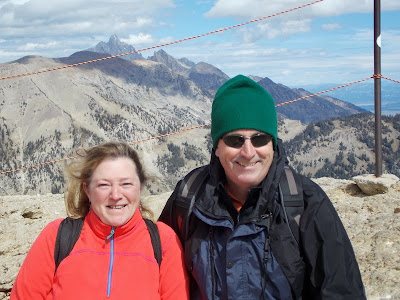 The ride down on the tram is at least as much fun as the ride up. Was I more relaxed? Was I able to enjoy the views and delight in the experience.

But it was a great trip, and I'm really glad I did it, and all I can say is: if you ever find yourself in Jackson Hole, looking for something to do for 2 hours, ride the tram up to the top and have some waffles at Corbet's.

You'll be glad you did.

Posted by Bryan Pendleton at 6:42 PM