The day dawns grey and cool, with a steady rain falling. Even the gorgeous pair of Red and White Setters at the Castlemartyr reception desk are looking rather mopey (perhaps they don't get their regular walk in weather like this?).

But it will not get us down: today is our last full day in Ireland and we have a lot planned!

Just down the road from Castlemartyr is Barryscourt Castle, recently (2002) renovated and restored by heritage experts from the Irish OPW.

Sadly, an enormous storm in February damaged the electric equipment in the castle and so they cannot admit visitors to the tower house, which is a shame because from all accounts the restoration was particularly well done. 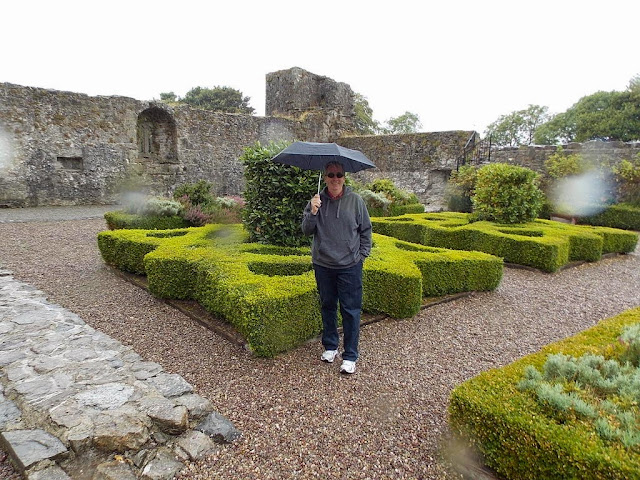 But Robin, the OPW docent on duty this morning, cheerfully puts on his all-weather poncho and gives us a great tour of the gardens and grounds in the rain. His enthusiasm is infectious and even though we don't get to see the inside of the restored castle, I am glad we stopped.

Donna reports that the Pippin apples in the castle garden are yummy; they have carefully planted traditional varieties of Irish fruit trees in the restored orchard, paying as much attention to the authenticity of the garden restoration as they did to the tower restoration. 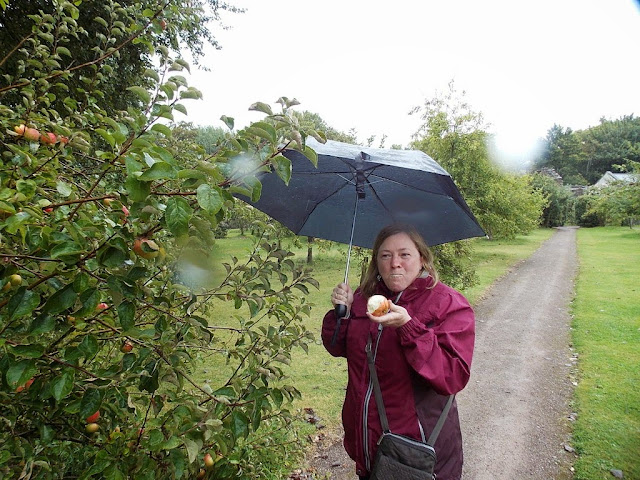 Though I know a lot about it ahead of time, Blarney Castle, it turns out, surprises me. I am taken by three unexpected things: 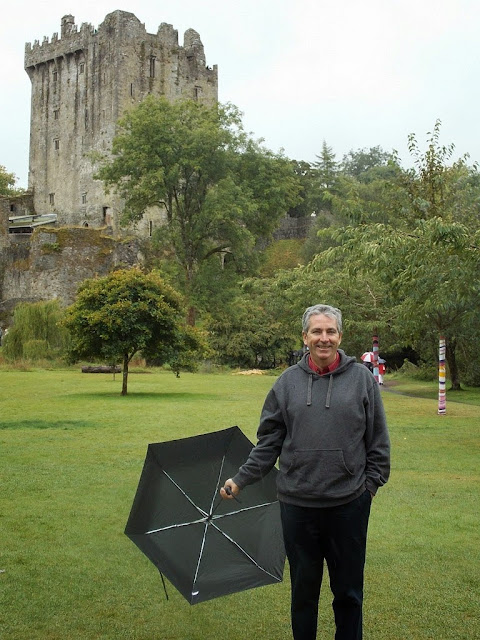 But of course, you're there to see the stupid stone.

So, uncertainly, but with excitement, we enter the castle and begin climbing the stairs. Several times, we have to stop in side rooms and rest, for 10 flights of stone spiral staircase are surprisingly fatiguing.

Finally, we are at the top, and it is overwhelming. You emerge from the tight quarters of the windowless spriral staircase and find yourself standing in the open air, atop the Blarney Castle parapet, 100 feet up in the clear Irish air!

And you barely have time to catch your breath (that is, if your fear of heights allows you to breathe) before you find yourself at the Blarney Stone itself.

Donna eagerly hands me the camera, drops her backpack, purse, and coat at her feet, backs up, lies down, leans back over the side of the wall into thin air and KISSES THE STONE! 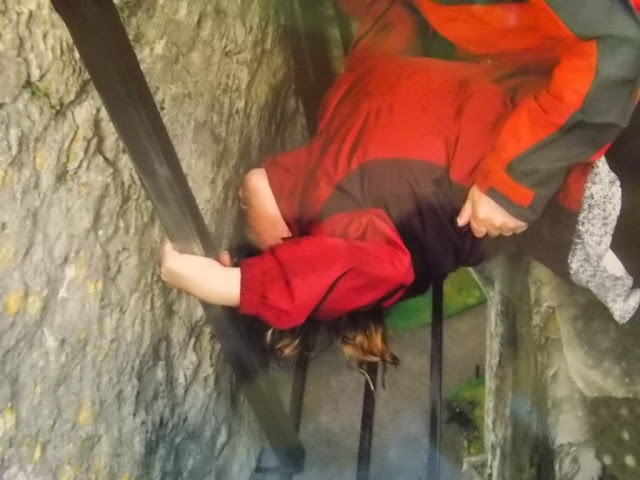 I snap 3 pictures, the Castle employees snap 2 more, and down we go.

The Castle is arranged such that you can take your time on the descent, viewing some of the other parts of the tower, but we're so breathless from visiting the top that we pretty much race down.

Still, we linger on the castle grounds for at least another hour, visiting the Poison Garden and the Rock Close and several other sights before we are ready to move on. We linger, knowing that these are mostly manufactured sites, not authentic ones, because they are attractive and enjoyable, but I am drawn on, to find more and truer destinations.

Thus we drive up the roadway through Mallow to Charleville, where we find the turn for Kilmallock.

Kilmallock is a fascinating medieval town, with sections of the city wall still standing, incorporated into the modern houses and shops quite seamlessly, and with several city gates still present as monuments of their own. There is an old friary and a collegiate church here which we explore, accompanied by three young ragamuffins, bored by the inactivity of summer, kicking the dirt and playing throw-a-stone to pass the time.

Now we are on the road again, up through Bruff and Holycross until, after being lost (yes, again), I find the Grange Stone Circle, the largest (114 stone) stone circle in all of Ireland.

Although the circle is large, the stones are smaller and the location less dramatic than at Dromberg, so the overall effect is much milder. Still, we enjoy wandering around, keeping a certain distance from the grazing cows. 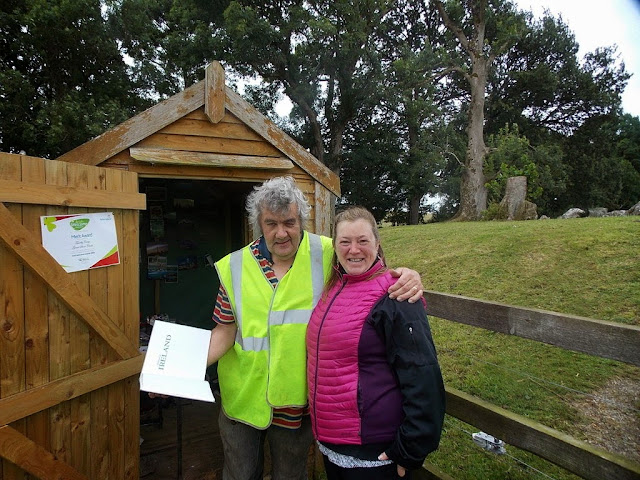 It turns out that he is the owner of the land on which the circle sits, and he is pleased to talk with us. His name is Timothy Casey, and he spends 20 minutes with us, explaining the stone circle, showing us other sites nearby, and sharing pictures of his children, one of whom has moved away to America. We promise to send him a postcard from the U.S.A.

Time is short, so we bid farewell to Timothy Casey and drive around to the other end of Lough Gur to the visitor center.

There, an extremely enthusiastic docent offers to give us the "5 minute overview"; 20 minutes later she winds down after realizing that we had had about all we could take. But there is a lot to talk about, as this beautiful lake has been the site of human settlement for at least the last 6,000 years, and there are archaelogical and historical sites spanning that entire time (of which the Grange Stone Circle is just a small part). 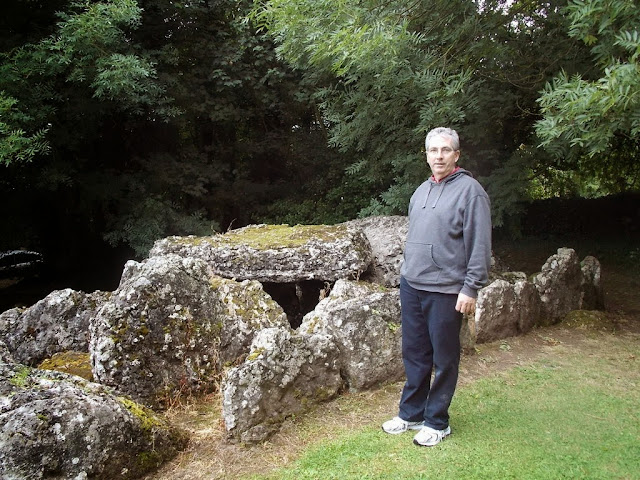 In addition to the stone circle, we visit archaelogical digs, stone forts, a medieval church ruin, a medieval castle, and, at the end, a "wedge tomb" called the Giant's Grave, carbon dated to 4,000 B.C., far and away the oldest human-created site we've visited in Ireland.

But it is late, and we are tired; we make our way to the Dunraven Arms in Adare, coming full circle. It is just as charming as it was a week ago, though there is no wedding tonight. We have a nice meal in the town pub, relax, unwind, and get ready to travel tomorrow.

Posted by Bryan Pendleton at 7:56 PM