I must not be very practiced at sleeping in hotel beds, even extremely nice ones, because again I am up with the sun. We have a nice breakfast and take our time packing up and checking out, but even so we have left the hotel quite early.

By 9:00, we are at Charles Fort, the largest fort in Ireland and perhaps in all of Europe. 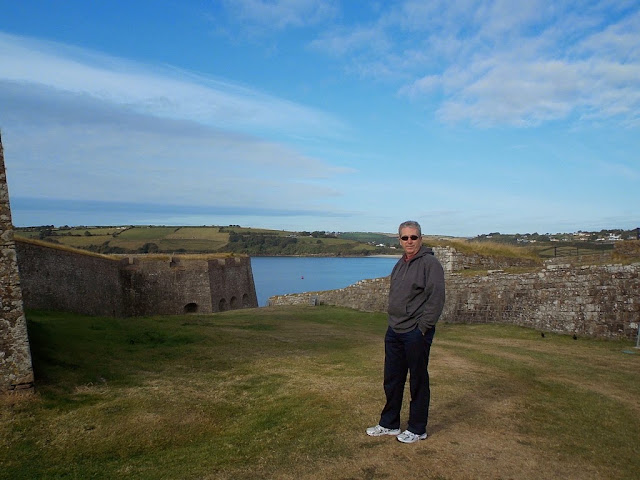 Unfortunately, the fort isn't open for visitors until 10:00.

However, the grounds around the fort are open, and well-cared for, and there are trails along the waterfront, and so we walk here and there, taking pictures, enjoying the views, and soon enough it is 10:00. 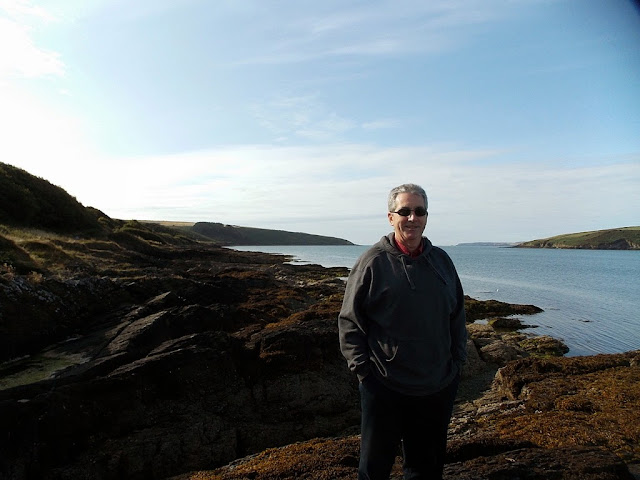 Inside, there are several small museums and exhibitions, and more areas to explore, but actually the fort is in many ways better from the outside than from the inside.

In particular, the fort is most interesting when viewed from the Harbor Cruise that we took yesterday: the fort was designed for naval purposes and so its main focus is on the harbor. 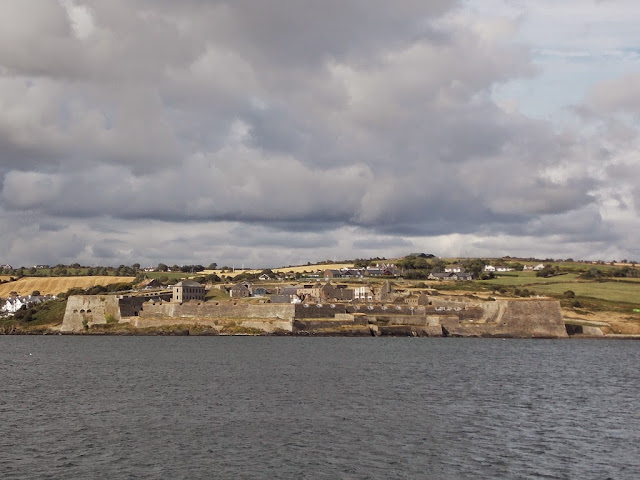 Apparently, though, it wasn't really a very good fort, because it kept getting sacked (though thankfully, it wasn't completely destroyed any of those times, or there wouldn't be anything left to see).

Actually, the most entertaining aspect of Charles Fort is the durable legend of the White Lady. 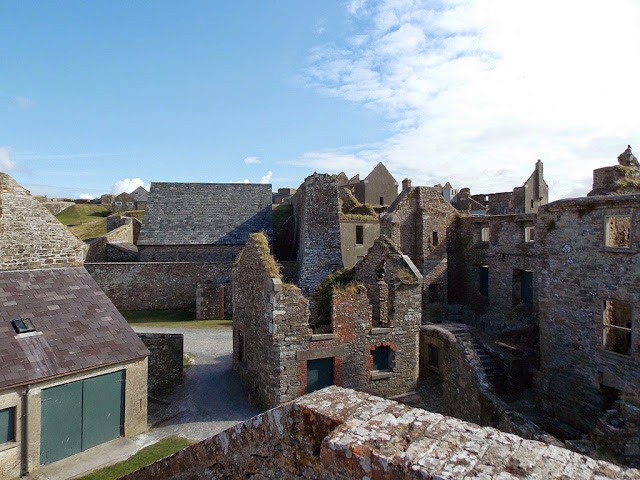 Anyway, no matter how you look at it, our time at Charles Fort was two hours well spent.

Then we drove up to Cork, and, for the second time on our vacation, I made a rather serious mistake about route finding and destination selection. For whatever reason, I took a path which lead us right through Cork City, rather than driving around it on the motorway. I found myself in the inner city, in a section of twisting, one-way, un-marked roads, and promptly got myself badly lost. And that part of town, unfortunately, is the poorest and most unhappy part of Ireland that we visited, so it really wasn't a place where I wanted to stay lost. Happily, it didn't take me all that long to find my way through the neighborhood, and back to a road that I recognized, and get us on our way again.

Still, I'm afraid I don't have any happy words to share about Cork City itself. I wish the residents all the best, and may things improve for Cork City as they have for other parts of Ireland.

We left Cork, and almost immediately took the turn to Cobh. Cobh is certainly not as scenic as Kinsale, but it has at least as much history, and plenty of interesting sights. 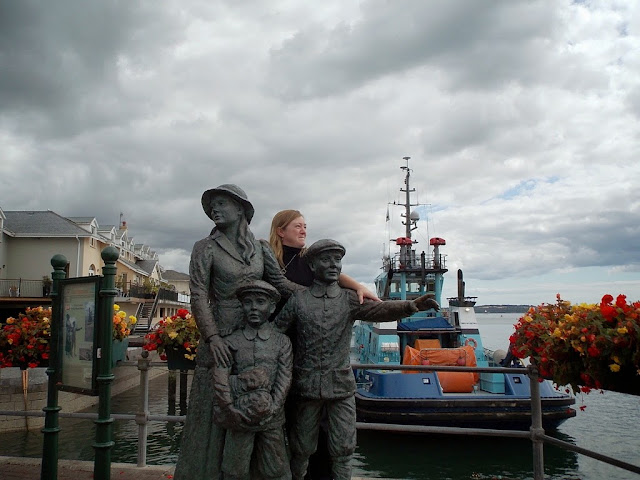 Cobh is probably one of the most important cities in Ireland from a maritime history point of view. It was the last stop of the Titanic, but more importantly it was the primary point of departure for many of the emigrants who left Ireland and came to America, Australia, or other overseas destination, a fact memorialized by the poignant Annie Moore sculpture as well as several local museums, including the quite nice Cobh Heritage Centre where we spent about 45 minutes.

Interestingly, Cobh also has an old prison on Spike Island in the harbor, which reminded me of the famous Alcatraz Island here at home.

The Cobh waterfront is quite pleasant to stroll along; St Colman's Cathedral on the bluff above the waterfront is just magnificent.

Our next stop is Midleton, a bustling modern Irish town. 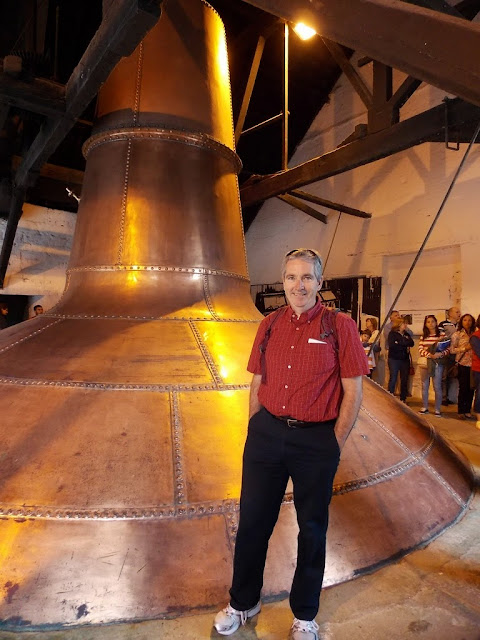 Each of the 6 buildings that we visit is a museum of its own, including: the old mill wheel; the enormous kilns for drying the malt (using coal fires, not peat fires: one of the signature differences between Irish whiskey and Scotch); the incredible 3-story tall copper still, the largest pot still ever built; the triple distillation system; and the aging warehouse.

The Jameson Distillery tour was certainly the most touristy thing we did on our holiday, but I'm still glad I did it. It was a nice tour, and it broke us out of a bit of a funky mood and put us in good "spirits" (heh). 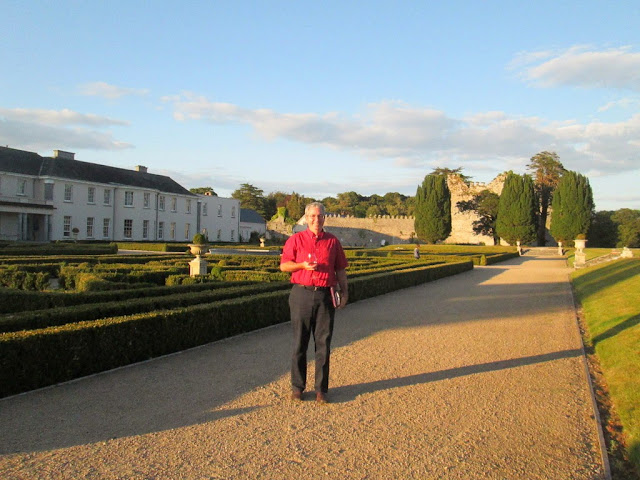 We trundle on down the road a few more kilometers east, to Castlemartyr, home of Castlemartyr Resort, our home for the next two nights. It is set on land once owned by Sir Walter Raleigh; the hotel reception, dining and banquet rooms, and other common areas are in the manor house built by the Earl of Shannon (who was the Speaker of the Irish House of Commons at the time); and (of course), just a few meters from the main hotel are the scenic ruins of Imokilly Castle.

The resort is quite modern, and is designed as a golf destination, with a super-luxurious spa as well, but for us the main attractions, beyond the buildings and the comfortable room, are the simply spectacular gardens behind the manor house, and the beautiful pastures and forests that adjoin the main buildings.

If we had not spent 3 days at Parknasilla I'd be raving on about Castlemartyr, but suffice it to say for now that we relaxed, had a drink, walked through the garden, admired the swallows as they raced about, and watched the children playing croquet and racing about on the grass.

Posted by Bryan Pendleton at 6:03 PM