This year we headed north, far north, about as far north as you can go and still stay in the state of California, to the Russian Wilderness, a small and not-well-known Wilderness Area tucked between the larger and better known Trinity Alps and Marble Mountain wildernesses in California's Salmon Range. 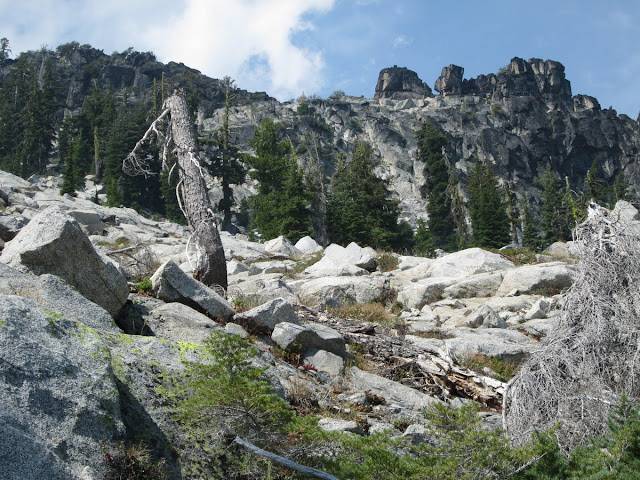 The best way to get to the Russian Wilderness, at least from where I live, is to drive north on Interstate 5 until you are nearly in Oregon. Just before leaving the state, you'll find yourself in the small town of Yreka, where you should stop and spend the night.

Sadly, the marvelous tale about the naming of Yreka, from Mark Twain's autobiography, is not true, though you may be like me and choose to believe it anyway!

In the morning, make your way down California Route 3 through Etna, and then up to the Russian Wilderness trailhead of your choice.

Etna has its own marvelous creation story, commemorated by an E Clampus Vitus plaque on the main drag. The town was founded by local pioneers who relocated from the mining center of Deadwood.

There are a number of ways to arrive at Paynes Lake, but we chose to take the trail from the Paynes Lake Trailhead, which is on the eastern edge of the Russian Wilderness, up French Creek Road from Etna.

Now, sometimes trails are interesting things in and of themselves, for the trail-maker may have various puzzles to solve and obstacles to overcome in the process of deciding how to arrange the trail.

In the case of the Paynes Lake trail, no such complication was in order: the trail-maker simply snapped a chalk line along the ridgeline between two canyons and sent the trail accordingly, resulting in an easy-to-follow and obvious trail which takes you from the 4,400 foot trailhead to the 6,500 foot Paynes Lake in a mere 2.4 miles of trail-walking. 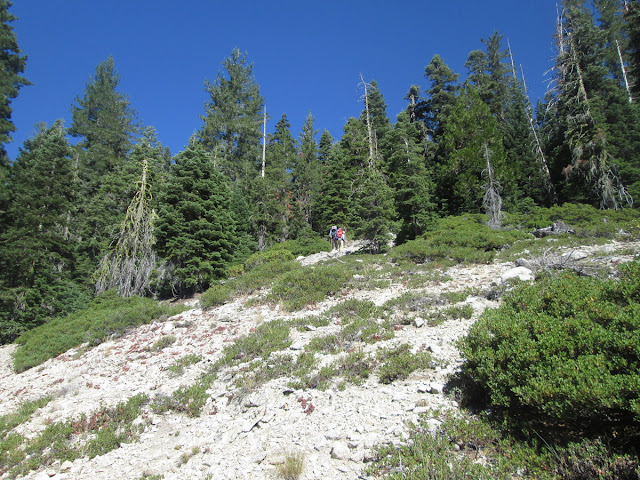 Which is not to say that the trail has no personality. As I walked it, I could see that it was divided into segments, as follows:

If you've done the math, you can tell that climbing 2,100 vertical feet in barely 12,500 horizontal feet is an average grade of over 15%, which is quite the climb.

The trail is at least forested and visited by breezes, which is something good that I feel the need to say about it.

And it got us to Paynes Lake. 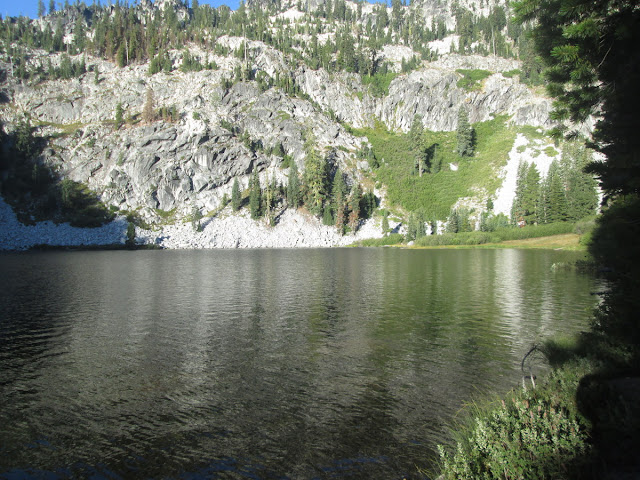 Paynes Lake itself is a perfect California mountain lake, a delightful 14-acre lake set in a gorgeous basin ringed by towering granite cliffs. It is wonderful for swimming, fishing, or just sitting by the shore and watching the time go by, depending on where your preference lies.

There are several very nice camping spots on the north side of the lake, safely away from the water but with nice lake views. The shoreline is forested and makes an excellent habitat for birds, squirrels, chipmunks, deer, and all sorts of other mountain creatures.

On our first afternoon at Paynes Lake we were treated to a spectacle I've never before seen in my backpacking trips: just around dusk, a bald eagle swooped down over the lake, passing barely 30 feet above the water surface. The eagle made several circuits of the lake, around and around, rising slowly until it disappeared over the ridge line, 300 feet above the lake surface. We never saw it again during our visit, but what a majestic bird that was!

If you've been paying much attention to California recently, you'll know a few things:

As a result, our first several days in Siskiyou County were heavily impacted by smoke from the forest fires. On our drive up, we could barely see two miles for the smoke, and we drove right past majestic Mount Shasta without even knowing it.

Several days into the trip, however, the smoke cleared, and our remaining time was blessed with superb visibility.

But we didn't get to see the Perseids, unfortunately. Can't have everything.

Most people who visit the Russian Wilderness are Pacific Crest Trail through-hikers, and typically they are On The Move, for they have miles to go before they sleep. 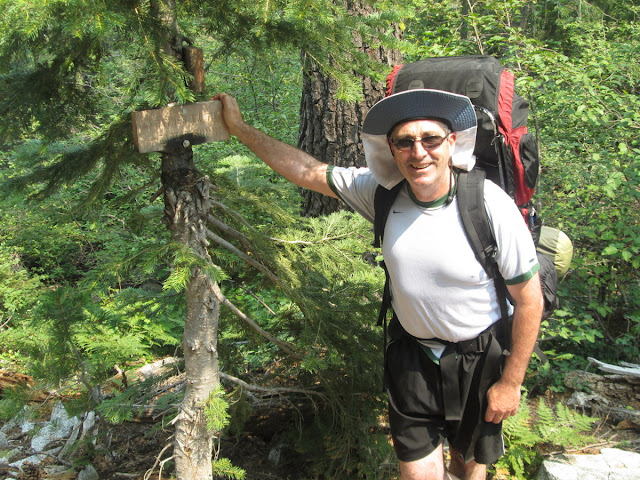 Paynes Lake, being both a Source Of Water as well as a delightful place to spend the night, is a frequent host to these most serious of backpackers, and we saw many of them during our visit.

Happily, though, these are folk who treasure the wilderness and care for it with the utmost concern, and Paynes Lake is remarkably well preserved for all the use it gets. 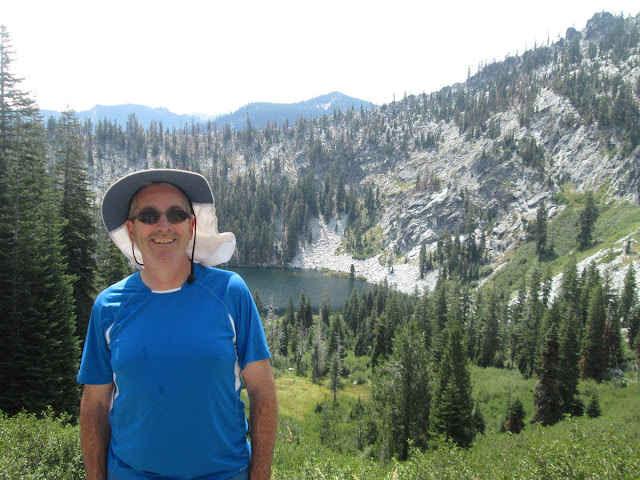 During our time in the Russian Wilderness, we spent a fair amount of time at the lake, but also made a few side trips:

The Russian Wilderness apparently came into being as part of the California Wilderness Act of 1984. I suspect that it has benefitted from being small, from being in a remote corner of the state, and from being sandwiched between several much larger and much-better-known wilderness areas. 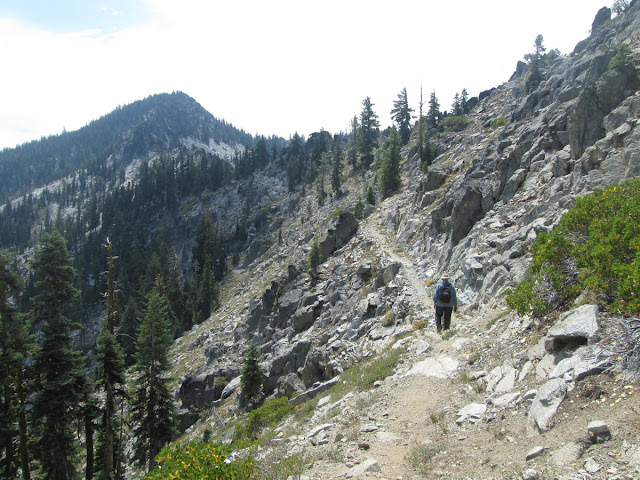 Regardless, the Russian Wilderness is a treasure. Even though it was formed from reclaimed logging lands, it has healed nicely. This area is wild, healthy, and vibrant, and it stands as a vivid demonstration of why America's wilderness areas are an inadequately praised marvel.

This year, I treated myself to my own Garcia bear canister. I've been wanting one for years, and it was time. You might think that buying a big black plastic jar is a complete wast of time, but Garcia bear canisters have simply transformed the way I visit the backcountry.

My other gear change this year was to pick up a set of Pat's Backcountry Beverages gear. This was actually our second year using Pat's; my friend brought the supplies last year. I think this is what you can say: it works, as Pat says it does. And beer in the backcountry is dramatically superior to no beer in the backcountry. That said, I wish they had a wider range of Brew Concentrate.

Posted by Bryan Pendleton at 8:26 PM