A warm day at the library

We found ourselves in Pasadena, CA, with a few hours to spend, and so I suggested that we make a trip over to the Huntington Library, which is just a few miles away.

Many years ago (too many to admit), I visited the Huntington as a child, and I was interested to see what I remembered, and what I didn't.

And I remembered the old house, and in particular I remembered the portrait gallery with Blue Boy and Pinkie at opposite ends, watching over us as we looked at all the Gainsboroughs, Romneys, Reynolds, and the like.

I bought a nice hat at the Admissions Booth, for I had forgotten mine; it has a nice embroidered squirrel next to the Huntington logo.

The Huntington seems to be doing quite well at keeping up with the times; far from being the musty old relic that I remembered, it has been steadily improving itself while still trying to retain the best parts of its past.

The entire building housing the new American Art section was not even present when I visited in the early 1970's, and it is still under construction, so I slipped through quickly to see a bit of this and that (Remington's Bronco Buster, a Georgia O'Keeffe, a John Singer Sargent, etc.).

It was good that we got to the gardens as early as we could, for it was a hot day in San Marino: at 10:30 AM when we began, it was already over 90 degrees, and by noontime it was well over 100. 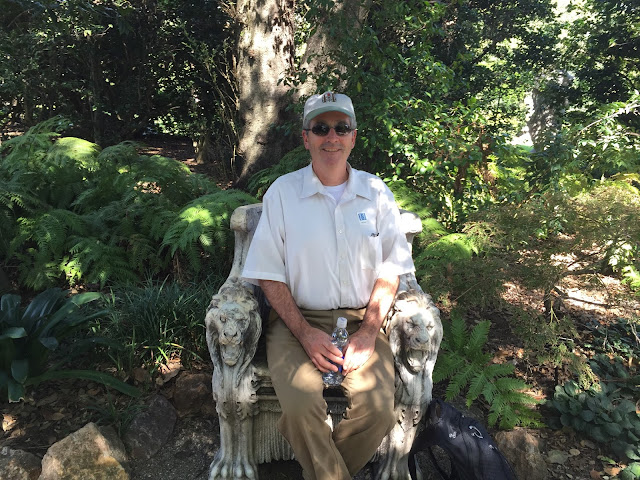 So we sought relief from the heat and treated ourselves to High Tea at the Rose Garden Tea House. We were lucky, for I had not made reservations ahead of time, but I think we were just a little bit early and so they were able to seat us. It was a very nice tea, with absolutely wonderful tiny scones and a nice buffet of tea sandwiches, fresh fruit, and sweets.

Of course, the Huntington is not primarily about the botanical gardens, nor even about the art, though those are both world-class; the Huntington's true claim to fame is actually the library.

So as we made our way out, I found 15 minutes to wander through the library's exhibit hall.

In addition to the amazing treasures that I remembered from my youth (The Canterbury Tales! The Gutenberg Bible! The First Folio! The Declaration of Independence! Paradise Lost! Birds of America!), the library was just nearing the end of a fascinating special exhibit, celebrating the 800th anniversary of the creation of Magna Carta.

All in all, I felt like a king, and so we commemorated that by snapping a shot of me in my throne in the Shakespearean Garden.

A day later, we were back at home in the Bay Area, marveling at the fact that just 24 hours (and 400 miles) had gone by, but the temperature was now a full 25 degrees lower. 78 degrees at 2:00 PM, we decided, is pretty nice.

But so was our nice warm day at the library.

Posted by Bryan Pendleton at 4:44 PM