We had the chance to spend a long weekend in Quebec City, visiting my parents there, and seeing the town.

It turns out that, if you're going to spend a long weekend in a place you've never visited before, Quebec City is one of the nicest possible such places on the planet. 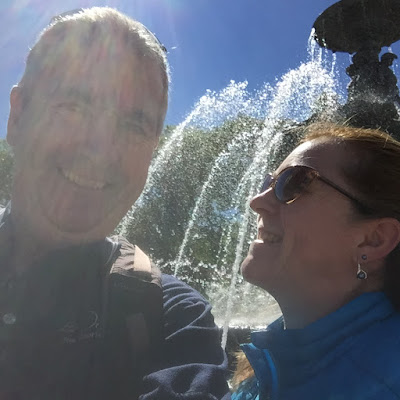 Especially when the weather is beautiful, as it can be in mid-September in Quebec.

The time went by so fast, and we did so much, that it seems ridiculous to try to re-tell it all. Instead, I thought I'd remark on just a few themes, such as: the town, the culture, the food, the arts, and the area.

Quebec City is simply a gorgeous town to visit. It's not too big, but it's big enough to be interesting. It's compact enough to explore on foot, but it's spread out enough that there is much to discover during your meanderings. 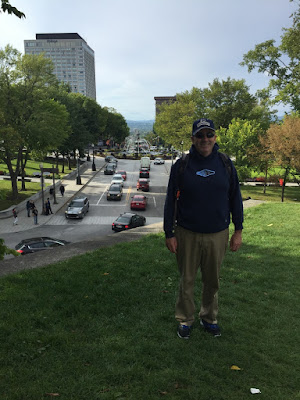 Quebec City is a UNESCO World Heritage Site, and also lays claim to being the oldest city in North America. It's certainly quite old for these parts, having had some sort of semblange of city government since 1608. 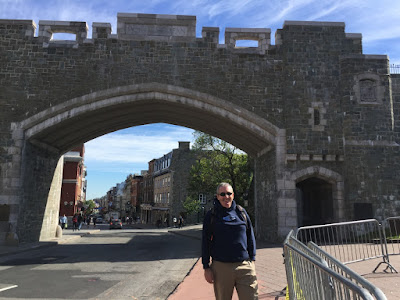 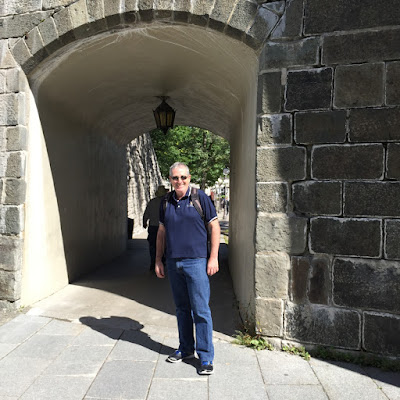 And, of course, the Chateau Frontenac, famously "the most-photographed hotel in the world". 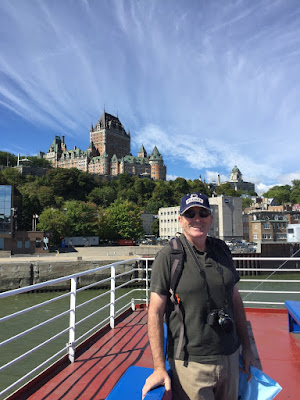 You can easily spend days just walking up and down the streets, sticking your nose into the cafes and stores and churches and galleries.

And it's just as beautiful at night-time! 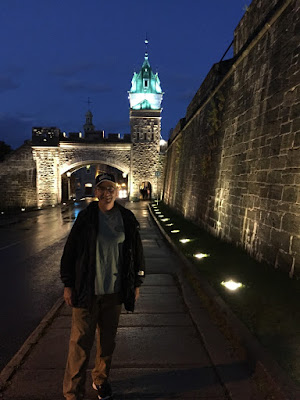 As befitting a city that's been present, in a very desirable location, for a very long time, there have been numerous cultures that influenced the city over the years: First Nations, French explorers, trappers and traders, Jesuit missionaries, British soldiers, sailors from many countries.

Although Quebec is solidly part of Canada, which overall have a very British Isles background, Quebec is nowadays the center of French-speaking Canada and is a very French place. 95 percent of Quebec City residents consider French to be their primary language. 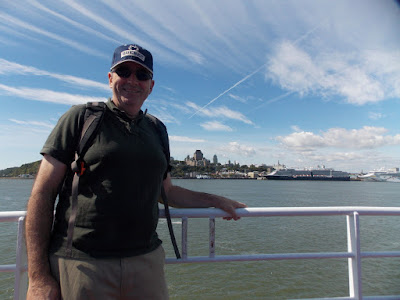 As befitting a place with such a Francophile culture, food is a big part of life in Quebec. At first, particularly when I saw what a tourist magnet Quebec City is (three enormous cruise ships were docked there during our visit, probably by themselves more than doubling the population of Quebec City), I was worried that we'd have to be very careful about where we ate.

But every place we tried, from the plainest and simplest breakfast cafes and diners, to the country restaurants, to the fine gourmet feasts that we treated ourselves to, was delightful! Fresh ingredients, nicely prepared, quickly and yet gracefully served, with good cheer in all cases. 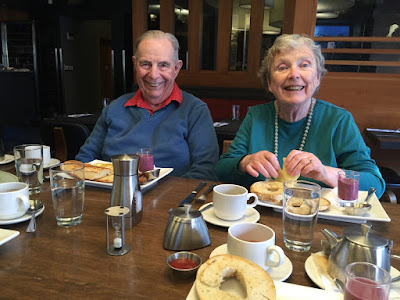 Beware, though: the portions are enormous! Quebec residents must certainly love to eat. I ordered the "small" crepe for breakfast one morning; it completely filled my plate! 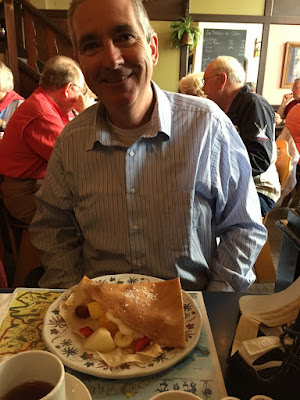 Among the restaurants and bistros that I can particularly recommend are these: Le Hobbit on Rue St Jean; Apsara restaurant just inside the Porte St Louis; down-home cooking (with live accordion music!) at Les Relais des Pins on Ile d'Orleans; Restaurant Copas, a tapas place on Grande-Allee; Le Buffet de l'Antiquaire (delicious food at a hole-in-the-wall diner in the Lower Town); and, perhaps a bit surprisingly, the cafe inside the Musee National des Beaux-Arts, which was just superb. 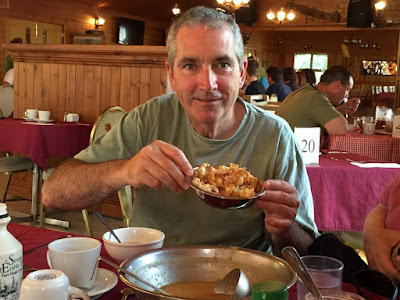 And how could I forget about High Tea at the Champlain Restaurant in the Chateau Frontenac, even if it was mostly about the ambiance, not so much about the food? 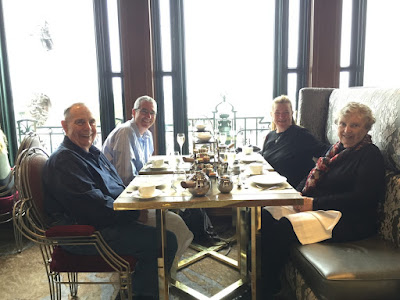 Although Quebec City is perhaps not as "arty" a city as, say, Montreal, it is still home to a very active arts scene. There are museums, studios, and galleries everywhere. Pretty much every restaurant or bistro near downtown features live music most nights of the week. There are statues, fountains, murals, and other public artwork throughout town. 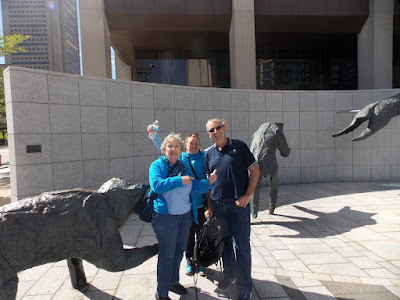 There are street musicians out performing on the corners. While we were there, the Quebec City Film Festival was underway, and people were seated at an open-air theater in Place d'Youville watching a French comedy I didn't recognize, while just a few blocks away a pair of street musicians were singing their hearts out as a group of a dozen fans danced happily on top of the city wall. 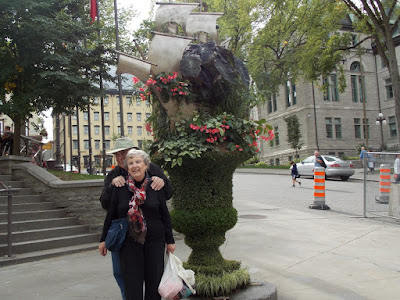 And, tucked away in a corner, a little shop housed a master violin-maker (luthier), who trained in Cremona before opening his Quebec City shop. 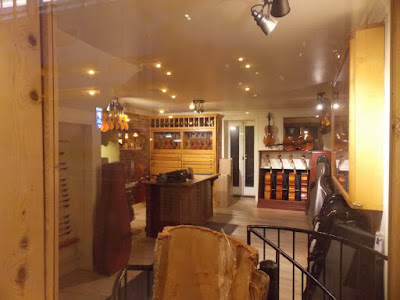 If, somehow, you get bored of Quebec City proper, you can get out of town, and still find lots to do. 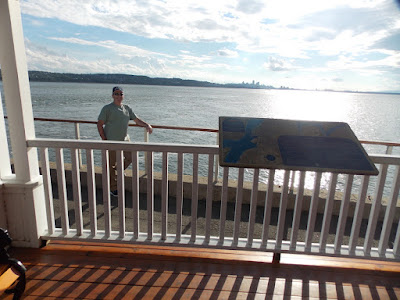 One fine afternoon, we went and toured Ile d'Orleans, which offers a delightful agri-tourism experience. We stopped at a Creme de Cassis maker, a cheese maker, and a winery which made a very interesting "ice wine", among other things. 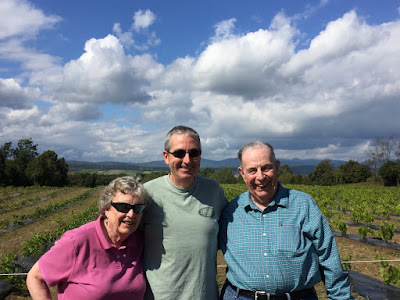 Another day, we drove up to visit the recreated Huron village on the Huron-Wendat reserve, which was quite interesting.

(By the way, if you're at all interested in the First Nations history of Quebec, you simply must, must, must read Joseph Boyden's The Orenda. You won't read a more powerful book this year, I promise you.) 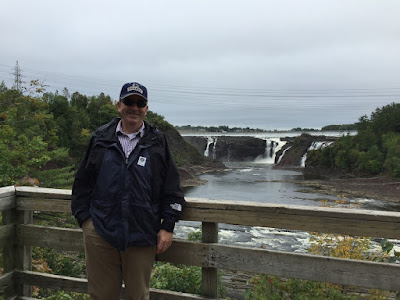 At on yet another day, we found our way to the delightful park at the hydro-electric power site at Parc des Chutes de la Chaudiere in Levis. Not only are the waterfalls beautiful, the park has miles and miles of trails to walk, not to mention a completely unexpected and exhilarating pedestrian-only suspension footbridge over the river. 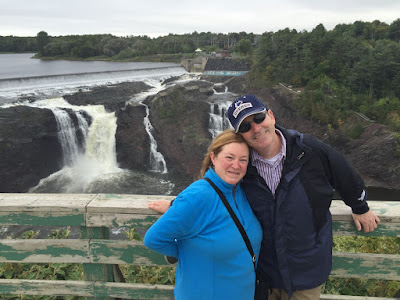 As you can see, I could just go on and on and on.

But that's probably enough to give you a feel of just how much fun it was to visit Quebec City.

So, make your plans now: September 2017 isn't that far away!

Posted by Bryan Pendleton at 9:42 PM