We slept like exhausted travelers, but awoke refreshed and ready for more. Could we have a better second day? Why not?

We popped back on the Tube and exited at Westminster, hoping that by arriving early we'd have fewer crowds.

After a short wait, we are inside Westminster Abbey, where we pick up headsets for the audio tour (narrated by Jeremy Irons).

Touring Westminster Abbey is extremely fascinating. To start with, it is a beautiful building, with plenty of art and architecture to experience. 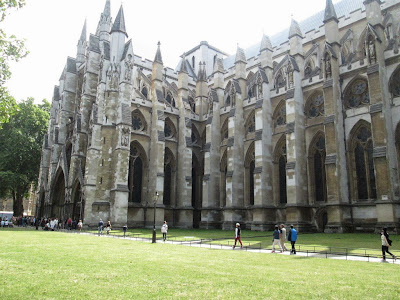 And it is packed with history and tradition. Just the day before, while viewing the Crown Jewels, we had paused to view the video of Queen Elizabeth II's coronation in 1953, so it was quite interesting to be standing in Westminster Abbey, just a few feet from the raised platform where the coronation occurred, and to see the Coronation Chair (now no longer with the Stone of Scone).

But Westminster Abbey is also overwhelming; a thousand years of history, religion, arts and sciences, warfare and country are all jumbled together and deposited upon us at once.

For myself, I was most taken by the tombs and memorials to the scientists (Newton, Darwin, John Harrison, etc.), and the artists (Chaucer, George Frideric Handel, etc.), but I do try to pay attention to the Kings and Queens.

(I must admit to be rather naive or uneducated in one respect: for some reason it didn't occur to me that everyone was buried in the church itself; I somehow had it in my head that churches were churches and graveyards were graveyards, but at any rate, as Donna says, I'm not confused about that anymore.)

After what seemed like hours of viewing the Abbey, we were both quite pleased, but also thoroughly tired, so when we found ourselves in the old 13th century monastery section of the Abbey (called the Cellarium), where to our surprise there was a delightful small cafe, we immediately stopped in.

Donna, in a moment of inspiration, spots that they are serving high tea, and so we have our tea, scones and all, and it was just superb! 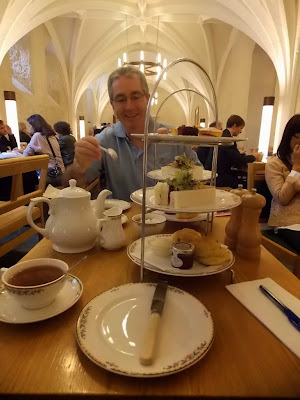 We cross through Parliament Square and over to St James's Park, where we walk through the park along the lake. Most of the birds are quite familiar (ducks, geese, swans, pelicans, coots, etc.) but it is fun to see them here in the heart of the city, and all the passers-by are delighted by them. 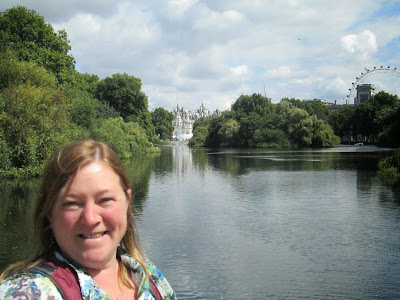 I was confused by the maps I'd read into thinking that Buckingham Palace Gardens is an open space like the other royal parks, but of course it is not, so we detour a few blocks and walk over into Belgravia, by Eaton Square and up Upper Belgrave Street.

We walk past simply dozens of foreign embassies; I have fun guessing them as we approach by spotting their flags. 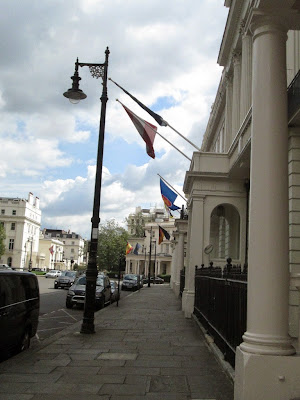 Anyway, we walked along the Serpentine as children played on the shore and paddleboats coasted gently through the water. 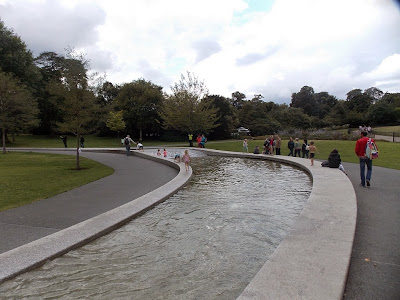 The memorial is open, informal, and family-friendly, with little pomp or ceremony; in this way it seems to me entirely appropriate for Diana.

Just a short distance away (is this coincidence?) is another memorial to another unusual royal: the Albert Memorial. While the Victoria Memorial is right in front of Buckingham Palace, the Prince Consort's memorial is miles away in South Ken, but visually the two memorials have much in common: both are massive pedestals, adorned with statues and embellishments, and topped with gold figures.

We walk down through South Kensington past the Royal Albert Hall and by the V & A museum, its entranceway mobbed with families and street vendors.

The Royal Albert Hall, I notice, is holding its summertime series of "prom concerts," which I later look up and discover means "promenade" concerts, originally because they were held outside and the audience walked around freely, but which now means that you stand up for the show in standing-only areas!

From South Ken we ride the Underground on the District Line over to Temple. We walk up the Strand past the Royal Courts of Justice and Temple Bar, admiring the various sights along the way.

When the Strand becomes Fleet Street we stop at tiny Twining's Tea shop: 305 years in the same location! 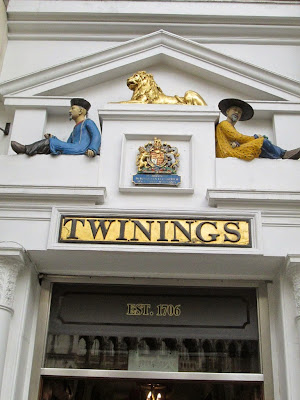 We pass two other Christopher Wren churches, then read the magnificent St Paul's Cathedral with its enormous dome. We can just barely make out visitors enjoying the view from the tower atop the dome, but there is no time to rest, we have much more to do!

We walk down and across the delightful Millenium Bridge. A street artist has been working here this summer, painstakingly painting tiny micro-paintings between the non-skid bumps on the bridge's walkway. 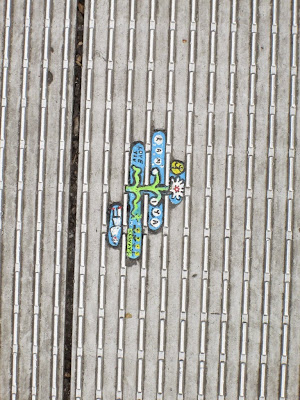 He is there on the bridge now, talking with tourists and fans, and we stop and photograph some of his work.

We admire the reconstructed Globe Theatre. An afternoon show is in progress, so we can't take the tour, but we are amused when we see a number of actors come running around the side of the theatre and disappear through a back door, evidently exiting "stage left" in order to re-enter "stage right".

We walk along the south bank of the Thames. Past Blackfriar's Bridge we stop in Doggett's for a pint of Marston's and a rest. Fortified, we walk along the river until we reach the London Eye, passing a nifty statue of Laurence Olivier out in front of the National Theatre. 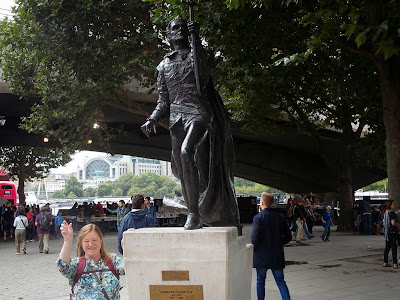 A large summer festival is taking place along the waterfront and the area between the Eye and County Hall is jammed.

We snap the classic pictures of the Houses of Parliament and Big Ben across the river, then cross Westminster Bridge. 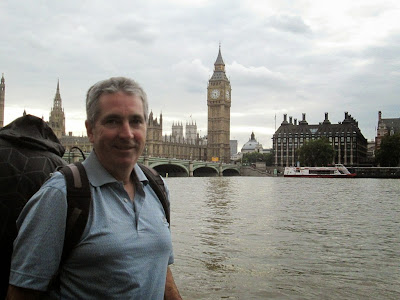 We take the Tube back to the hotel and use the (free!) guest laundry while sharing a plate of fish and chips and watching the Bayonne vs Toulon rugby match on T.V.

I am baffled by Rugby.

But the fish and chips is delicious.

Posted by Bryan Pendleton at 6:47 PM