We found ourselves with two entire days to explore Central London.

The weather was glorious (at least, it seemed glorious to us), and, since neither of us had ever been to London, everything was new and exciting and interesting and fascinating.

So, naturally, it wasn't a question of what to do, but rather of trying not to overdo it.

Which I don't think we totally achieved, but still, we had a fabulous two days!

Here's how Day One went.

We got off the Underground at Green Park and walked through the park to Buckingham Palace. 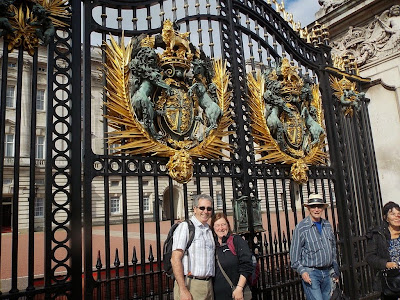 We spent a while admiring the Victoria Memorial, and the palace gates, and the Queen's Guard, and the whole scene, then we walked down past the Wellington Barracks and the Ministry of Justice to Parliament Square.

It was already 11:00 AM, and there was an imposing line at Westminster Abbey, and so we decided to defer the tour. So we took pictures of Big Ben, just as it was tolling the hour. 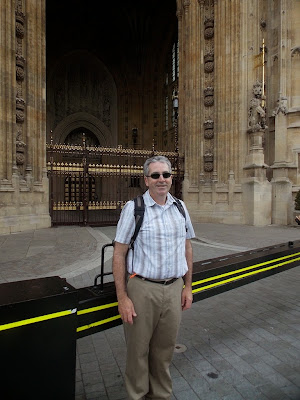 We walked around to the back side of the Houses of Parliament (known as Victoria Tower Gardens, where unfortunately the Rodin sculpture The Burghers of Calais was not on display because it was out on loan to the Henry Moore Museum), because somehow I thought that we'd be able to walk entirely around Parliament, but of course you can't; you can only walk to the edge of the Thames but not along it, there.

So we walked back, past the statues of Richard Lionheart and Oliver Cromwell, and started walking up Whitehall.

As we went, we were accompanied by the Horse Guard, who were just changing the guard at that moment. It was so much fun to watch them that we walked right past Number 10 Downing Street without even noticing it. 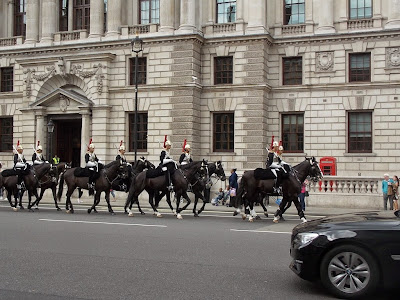 I did enjoy seeing the Banqueting House, and the Gwydyr House of Wales, and the back side of the Ministry of Defense, and a few other buildings along Whitehall. 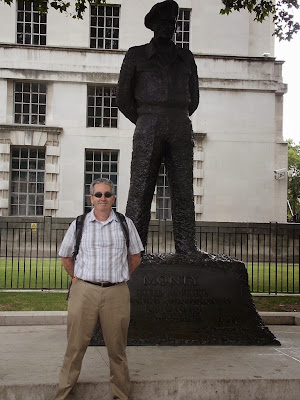 And found ourselves at Trafalgar Square, staring up at Admiral Nelson on his perch.

We made our way through Leicester Square and on into Covent Garden. I particularly enjoyed the "Seven Dials" intersection, and we both had fun walking through Neal's Yard, which was just as colorful and eccentric as the Internet had promised it would be. 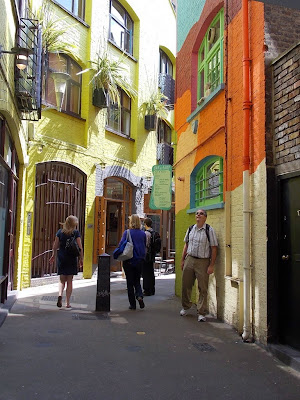 We were feeling a bit peaked, so we took a break and stopped at the Bloomsbury Tavern on Shaftesbury Avenue to rest for a bit.

Suitably revived, we cross a street or two and find ourselves at the British Museum, the sun shining brilliantly, the courtyard jammed with families picnicking, children running about. We stop at one of the food trucks and split a sandwich.

Oh, dear reader, you will find this horrifying, appalling, but it is true: we toured the British Museum in one hour.

What do you see in just that time? Well: the Rosetta Stone; the Parthenon Marbles; the Lewis Chessmen; Egyptian mummies; Persian ceramics; Roman statues. Someday maybe I will have a week just to visit the museum, but for this day an hour made do.

Coming out of the museum there was a light rain coming down, so we high-tailed it to Holborn Station and rode the tube down to Tower Hill, transferring at the unspeakably complex Bank/Monument transfer station. 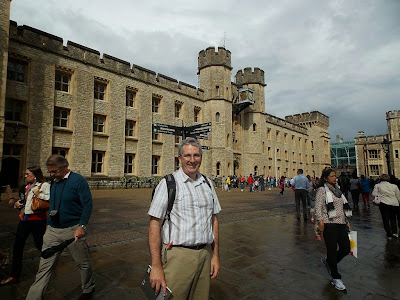 We arrived at the Tower of London just after 3:00 PM.

Can you see the entire Tower of London in two hours?

Why yes, you can!

The White Tower, the Bloody Tower, the Traitor's Gate, the Wall Walk, the Crown Jewels, the Royal Armor, the inner and outer yards, the ravens, the Scaffold Site. 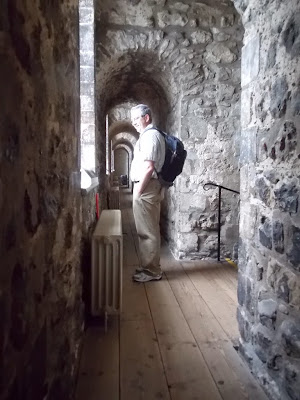 Wait, did I mention the CROWN JEWELS?!

Two hours, in many ways, is just about the perfect amount of time to spend at the Tower of London. You certainly could spend more, and there was certainly more to see, but we saw everything we wanted and saw as much of it as we wanted.

And we were both fascinated by the art exhibit taking place on the grounds of the tower: Blood Swept Lands and Seas of Red.

The rain was becoming more steady, so we rode over to Victoria Station and I had a Doom Bar in the Belgravia Pub. It was a nice enough place, but the cigarette smoke in all the pubs is rather hard on a reformed smoker, so we decided to look elsewhere for dinner. 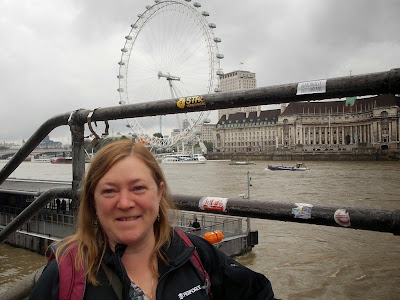 Down the road and around the corner was da Scalzo, an acceptable Italian restaurant, which served us an acceptable pizza, and it was time to declare the day done, and head back to the hotel.

Posted by Bryan Pendleton at 7:01 PM