Our room is so comfortable that we sleep late.

But hey! It's our 29th anniversary. I think we are allowed.

We pile in the car and set out on the Ring of Kerry.

As described by several books (esp. Rick Steves), we are driving clockwise, while the tour buses always drive counter-clockwise. The main point of this is that the attractions that we visit in the morning are those which the tour buses will visit in the afternoon, thus hopefully we avoid most of that activity.

Our first stop is Staigue Fort, a prehistoric ring fort built at the top of a river canyon with a commanding view of the bay. For a 2,500 year old building, it is in remarkably good shape. 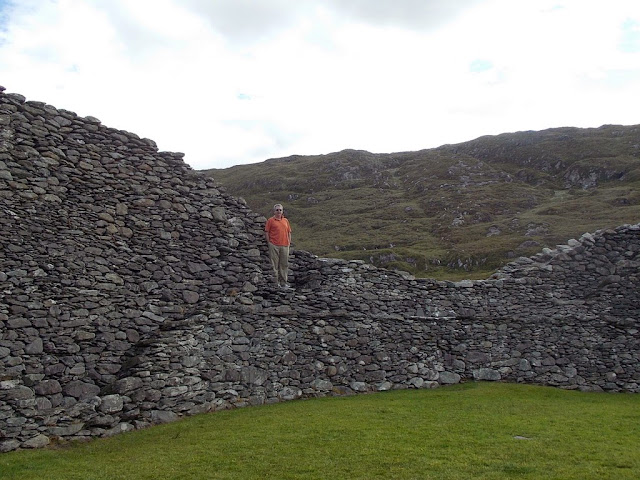 The walls are built of large flat stones laid without mortar, but the stones haven't budged an inch and are as solid as you could imagine. An ingenious arrangement of open staircases inside the ring allows you to easily climb to the top of the walls. 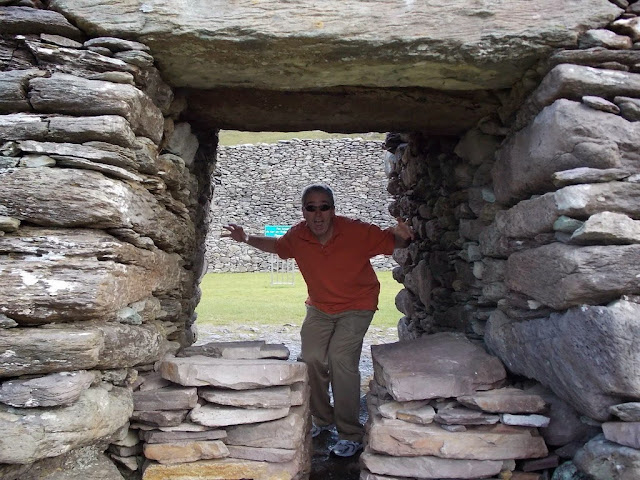 The only entrance is narrow, set such that you have to inch through sideways.

A large moat around the outside makes the walls effectively 25 feet tall. It is easy to see how this fort provided a formidable and effective defense for centuries.

Our second stop is Derrynane House, home of Daniel O'Connell, "the liberator." 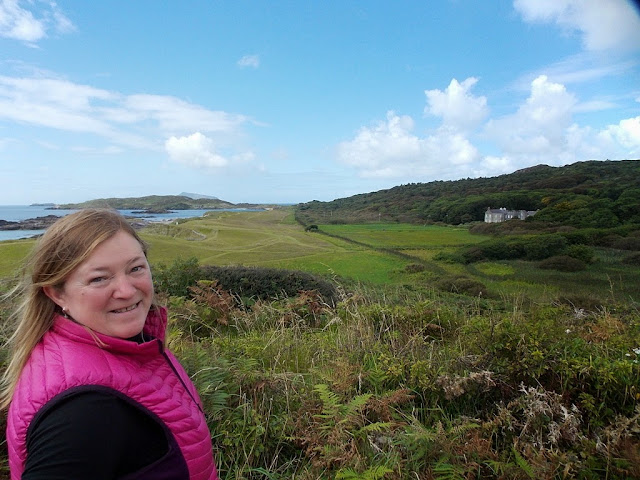 The house is set on a beautiful plot of land on the waterfront, and there are acres of walking trails to explore, wandering through meadows and beaches.

Daniel O'Connell's house, itself, isn't all that interesting, but his life is fascinating beyond words. 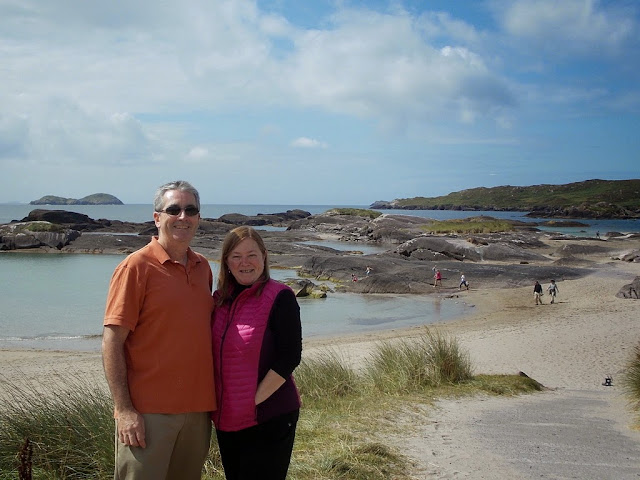 As a youth he witnessed the French Revolution firsthand, while studying in Paris.

He became a lawyer and practiced trial law in Dublin, becoming one of the most famous and successful lawyers of his time. He was challenged to a duel at the conclusion of a case and killed his challenger (the pistols are displayed at the house).

He founded the Catholic Organization and grew it to hundreds of thousands of members in just a few years. He ran for election and was elected the first Catholic Member of Parliament. He refused to take the Oath of Supremacy, resulting in Parliament overturning the law.

He organized the "Monster Meetings" to protect the treatment of Catholics and was thrown into jail. When he was freed, he was paraded through Dublin on an enormous chariot (also on display at the house). 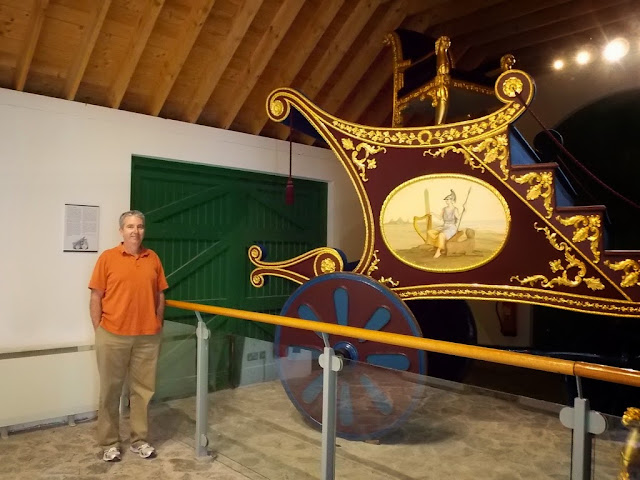 After leaving Derrynane, we make our way through Waterville and out the Skellig Ring to St. Finian's Bay. The Skelligs Chocolate Factory makes yummy chocolate, though we have been misled by the guidebooks into anticipating that their cafe had food for lunch.

We walk down to the beach and write our names in the sand. 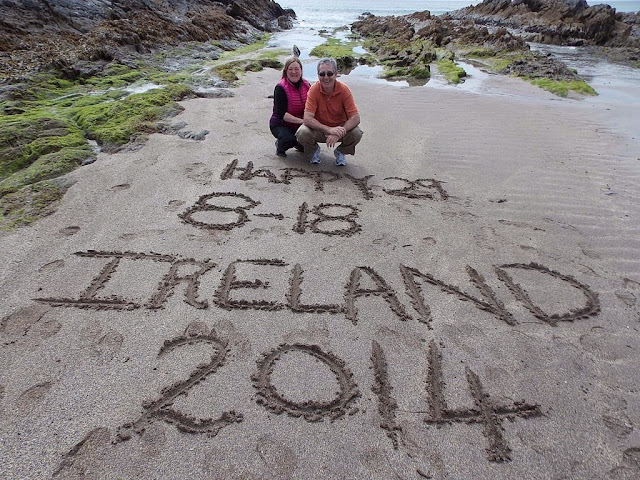 Coming back through Ballinskelligs, Donna spies a castle and we stop to investigate (already, one of our Rules For Traveling In Ireland has become: "when you see a castle, stop").

We find ourselves at Ballinskelligs beach, where there is a lovely little beach cafe where I have a scone and Donna has cabbage and potato soup.

Then we walk down to ruined McCarthy's Castle and Donna climbs to the top of the walls (this will become a pattern throughout the trip, as well!). 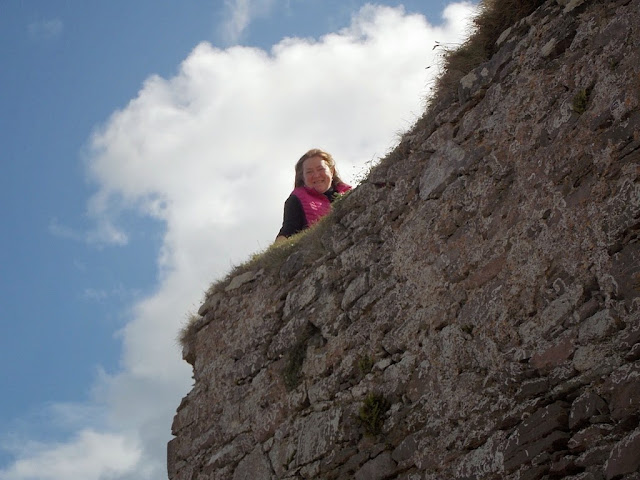 Then we walk up the beach to the ruins of the old Augustinian Priory, which it turns out was founded by the Skellig Michael monks and subsequently destroyed by Cromwell.

The beach is a most fascinating discovery; we later decide that this is our favorite spot in all of Ireland: ocean, mountains, beaches, castles, churches, and lunch. 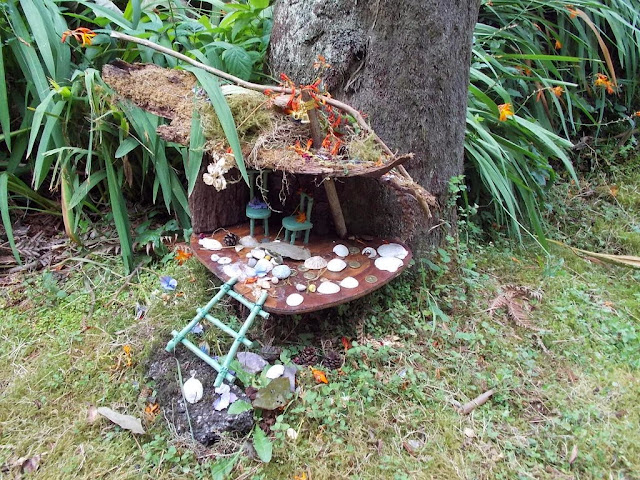 On our return to Parknasilla, we enjoy some of the paths through the grounds, and we're particularly taken by their delightful Fairy Tale Walk (according to the Internet, there was another such trail at Derrynane Park, but somehow we missed it, sigh).

Posted by Bryan Pendleton at 1:03 PM