Ireland Day One: Arriving and Driving

Because of the carriers we used, we found ourselves flying in and out of the brand new Terminal 2 (the "Queen's Terminal") at London Heathrow. This is truly a beautiful facility and I was very impressed by it: spacious but easy to navigate, with nice shops and restaurants and plenty of seating to accomodate travelers with time to spare.

Perhaps I should say a bit more about those "shops and restaurants", though. We had two very nice meals at the WonderTree Cafe in Terminal 2, and I recommend it highly. But the signature shops and restaurants for which Terminal 2 is known are, well, pretty high end (Burberry, Gucci, Bulgari, Bottega Veneta, Harrods, etc.); perhaps you might want to have a look at the menu for the Prunier Seafood Bar?

Enough of that; it's on to Ireland!

Our Aer Lingus flight to Shannon airport takes barely an hour, although unfortunately the cloud cover is extensive and I am only able to see a little bit at takeoff and a little bit at landing, enough though I suspect we flew over some beautiful territory (Wales, St George's Channel, as well as most of south-central Ireland). 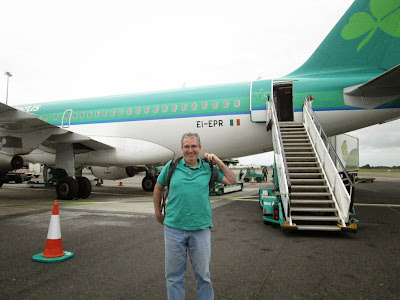 Shannon Airport is small and friendly and easy to handle. We simply walked across the street from the terminal to the car park to pick up our rented Renault and we were off on the Great Ireland Adventure!

We deliberately scheduled an extremely short trip on our first day in Ireland, because we knew that it would take some time to get the hang of driving in Ireland.

Really, though, there are only four elements to master in order to drive in Ireland:

So, anyway, we left the airport and got on the road.

A few miles from Shannon Airport is Bunratty Castle and Folk Park, an interesting place. 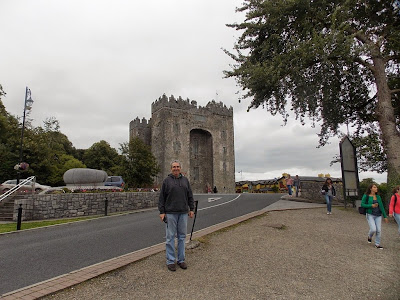 If you've read McCarthy's Bar, you'll recall that Bunratty Castle is the site of the funniest episode in the entire book, an absolutely hilarious adventure involving country roads, pubs, a medieval banquet, and two sisters from Philadelphia who have brought their children to Ireland.

Really, you have to read the book.

I wish we had taken the time to go in to Bunratty Castle and take the tour and visit the park, but we were still Ireland novices and I made a bad decision and decided to push on. This was perhaps one of only two bad decisions I made in Ireland about where to go and what to do, so I'm not going to beat myself up about it too much, but I'm definitely a bit disappointed to have only seen the castle from the outside (where it is still quite impressive).

So after waving to some of the children who were Way Up There at the top of the castle, we climb back into the car and venture on.

We drive into downtown Limerick and walk through the busy commercial center. We get some nice shots of King John's Castle from the river front, pick up a few necessities from the Dunnes Store in Limerick ("Umbrellas! How did we fail to pack umbrellas?"), and on we go. 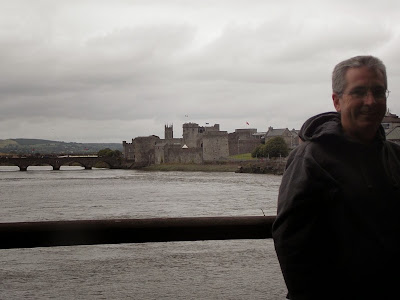 We take the motorway out of Limerick, then exit to the N21. Just 4 km before Adare, traffic crawls to a stop and Garda with alert lights flashing zip by us. We crawl into Adare at barely 10 km/hr, but the scenery is delightful and, did I mention this, WE'RE IN IRELAND!

As we reach Adare, the problem is clear: a tourist bus has broken down. But here is our destination, the Dunraven Arms Hotel! A wedding is underway and we must park far, far in the back.

The hotel is a delight. Quaint as all get out, but comfortable and stylish at the same time. Our room is beautiful, with a four poster bed and a large window onto a lovely courtyard garden. 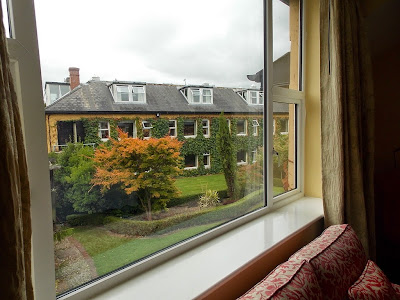 We walk through the gardens and the swallows are everywhere, swooping and darting and catching dinner. It seems there is a nest in every awning and eave.

Adare is often called "the prettiest village in Ireland" and with good reason. Thatched houses line the street, centuries-old abbey and friaries are just off the road, and the thousand year old castle is just across the river. 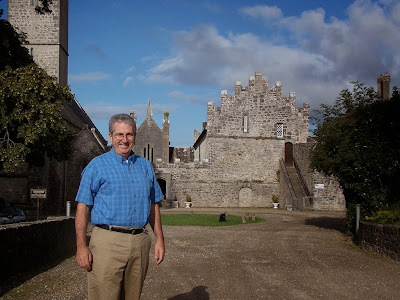 We walk up and down the town streets, buying some fudge from a local creamery, and later having a Beamish and a Caledonia Smooth to accompany our sandwich and soup at Auntie Lena's Pub. 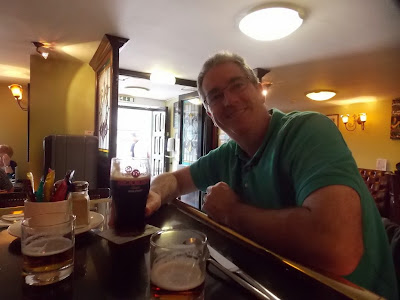 After our meal, we walk through the Adare Town Park, which is far too scenic and pleasant for that simple name, then return to the hotel to unwind, check email, and plan the next day.

Posted by Bryan Pendleton at 12:47 PM